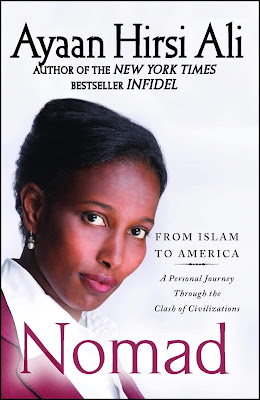 I have to say that Ayaan Hirsi Ali is one of the people who have influenced my thoughts and belief systems. When it comes to my attitude towards religion, I find myself agreeing with several of the arguments that she raises in her writings. So this book was also easy to digest. And surprisingly, I found plenty of parallels with her life, even though hers might be more dramatic than mine.

See, her Muslim upbringing, and the insulation that it imposes on its members, have plenty of similarities to the Jehovah's Witness experience. The fact that you're discouraged from socialising with other people who do not believe, the fact that you are not only excommunicated but also cut off by the rest of your believing family members by disowning you, the fact that these family members treat you like you were dead, all of these make me think that there's plenty in common between Hirsi Ali's experiences and mine. Though I have to admit, I'd say that my experiences were easier than hers.

In Nomad, she gives an account of how she eventually ended up from Somalia, to the United States, via Kenya, Saudi Arabia, and the Netherlands. With this nomadic outlook as a background, she narrates about the difficulties of growing up as a Muslim woman. She also presents several arguments how Islam is a threat to the West, as well as suggestions on how to combat it. While I think her arguments are mostly against Islam, I think her arguments can be extended to point against any flavour of radical and fundamentalist thought, even beyond Islam.

What I find resonating quite well with me is her take on critical thought, or perhaps her examples of people around her who lack it. There were plenty of her relatives who don't seem to understand the causal chain (or absence of it) between Allah and many of life's issues. This is also something that I found myself dealing with back then, when I was presented with arguments about how Jehovah causes such and such to happen. There was always this weird causal chain that was always being posited, about how good things were always caused by Jehovah, and bad things were always caused by Satan. People around me were so obsessed with the power of prayer, and they prayed a lot even to the point that they would rather pray than actually do something to make their lives better.

I remember the Witness community as a bubble, a bubble of people who seem to have been forgotten by the rest of society, a bubble of people who couldn't advance in life, mostly because they don't even want to try. The fatalistic approach to life was definitely there, and for some reason, I found extreme similarities with Hirsi Ali's portrait of the Muslim community. My only guess to this is that this is due to the fact that these people believe that life is beyond their control, that there's someone all powerful who just controls everything, like Allah or Jehovah, so what is the point in trying to control it yourself? As my father once said, that is just foolishness. I believe this would be the perfect time for him to quote Solomon.

In any case, this book is a great boost and encouragement for people who would like to see the advantages of critical thinking. Hirsi Ali is a great role model for mental and physical prisoners of high controlling groups and cults. I definitely would encourage everyone to pick up this book and read it. I give it 5 out of 5 stars.