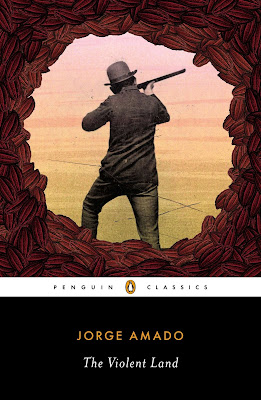 I must say that I was fascinated by this book. I only read one other book by Jorge Amado, and I don't know much about Brazilian literature. Nevertheless, reading this book made me want to try his other books.

This book is about a conflict between two parties, back when Brazil was massively producing cacao. Two powerful factions have plantations, and between their plantations is a forest. Both parties want to clear out the forest so that they can expand their plantations. And in this time and age in Brazil, there isn't really a rule of law. Rather, it is the rule of the gun: both parties use various tactics to try to eliminate the other, ranging from legal loopholes, corruption, bribing officials, arson, up to outright murder. The scene that this book paints definitely show Brazil's Bahia region as a South American Wild West.

There isn't a main character in this book. Neither of the two warring factions are the main characters. Rather, it is the entire land and overall town and the characters that compose this town, this entire conglomerate is the main character. The book basically shows the typical events that happen in one town, Ilheos. And yes, this land is indeed violent.

They say that this is a Modernist novel, but unfortunately I don't know much about literary theory to figure out what exactly makes this book Modernist. In any case, it was captivating. I was definitely transported to the scenes, and Amado knew how to keep his reader engaged. And sure enough, it made me add a couple more of his books into my reading list. Not only that, it also makes me want to visit Brazil one of these days.

One final thing that I liked, is regarding the plot. Up to the very end, when the war finally ended, there wasn't a clear preference which of the warring factions would ultimately win. The narrative was very objective, so to speak, and the author never favoured one over the other. Only when it was time to end the story, did one party start gaining ground, thereby allocating the forest to the winner. But as long as the book was going on, Amado was painting a picture of a very complex town, with its intrigues, its gossips, its happenings, its lives, and its deaths. I definitely liked this book, and recommend it to others to read. I give this book 5 out of 5 stars.