Book Review: The Dream of the Celt by Mario Vargas Llosa 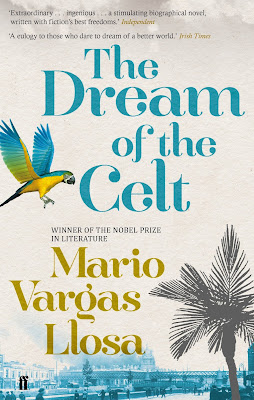 Oh, this is one wonderful read. It seems that with Vargas Llosa, most of the time I like his books, though there are some exceptions which I just find myself hard to be enthusiastic about. I must say that this one is not an exception. If you're looking for a good historical novel to read, then this is definitely a recommendation for you.

The Dream of the Celt is a novel about the life of Sir Roger Casement, a diplomat and Irish nationalist. He lived during the time when Ireland was part of the United Kingdom, and so he served as a diplomat of the British Foreign Ministry. He travelled to the Congo and to Amazonia, as a representative of the British government, in order to investigate the various atrocities that have been happening over there against the native inhabitants. In the Congo, he exposed the cruel practices of the Belgian colonialists just so that they can extract rubber. Similarly, in the Peruvian Amazon, he went there to expose the atrocities that the Peruvian Amazon Company (a British company) were inflicting on the indigenous peoples. These rubber boom companies were essentially generating their income using forced slavery. And Casement wanted to expose these practices, so that Europe would realise what was happening.

It is his travels to these outposts that eventually formed his beliefs about Irish Nationalism. Eventually, he realised that the United Kingdom was also being a colonial power to Ireland, which then fired his desire for an independent Ireland. Alas, all the stars didn't align well, so he was captured, tried, and executed for high treason.

I must say that this book was very well researched and well written. I was slightly positively surprised, since this doesn't read like a Latin American novel, which was what I was expecting, given the other books by Vargas Llosa. Yes, there was the Peruvian connection, but that wasn't apparent in the beginning, and it definitely impressed me, realising the skill of the author to present a variety of styles across his various books. I definitely would count this book as one of my more favourite Vargas Llosa novels.

I liked the structure of the novel: the chapters alternate between past and present, the present being Roger Casement in his prison cell, waiting for his execution. The past slowly crept forward, eventually catching up to the present time. So the flashback chapters provided an extensive exposition of Casement's life history, from his Irish roots, to his trips to the Congo, to the Amazon, and to his return to Europe, acting as the father of Irish nationalism.