Why I Was Out of the Blogosphere

I know I know. It's been a while. Approximately a week. Well, let me tell you that last week was indeed torture.

It felt like I was a juggler juggling all these important things both academic and domestic.

Actually, it started April 18. It was a Wednesday, and I received a letter from the city of Buffalo saying that I had to vacate my current apartment. The reason was that it was violating some sort of city code or ordinance. So I then brought it to the attention of my landlord the same day, and they initially assured me that there is no problem.

So that was that. School was still in session, and there are papers and exams to undertake.

Then comes Sunday April 22. I receive a call from my landlord saying that indeed I have to move. The good thing is that because it is their fault that they did not ensure that the place satisfies the city ordinances, they would move me at their expense. So they told me that there is this place two streets away, and it is a second-floor unit this time, and it is huge. And since it is their fault, I would not be paying extra for the extra space, I would be paying the same rent until my current lease expires, which is July 31. But starting August 1, I will be paying a higher rent. That means that I need to search for roommates. Although I still have a couple of months to do that, due to the current lease agreement. But then, I already sounded the word to some people I know.

So while school was going on, I was having these domestic issues. April 24, I looked at the house, and actually I like it. I like it than the one I was currently in. Mainly because it was larger and it had huge windows facing the street. The next day, I signed a modified lease, for the new apartment. I also called the utilities companies to turn on the heat and the transfer the name of the electric bill to mine.

On two days from April 26 to April 27, I moved my belongings. Of course, I asked the help of a friend. The funny thing is that when she saw my belongings, she told me that what we were doing isn't moving, but just moving things. Indeed, I have few belongings here. I guess I know that I am just temporary here in this part of the world, so why would I accumulate junk when I know that in a few years (and at this point, possibly just two years) I would dispose of them?

So I first slept in the new apartment on the night of April 27. I returned the keys to the old apartment the next day. The trial continues because the heat wasn't going to be turned on until Tuesday, May 1. So for the last 3 days, I had Siberian showers. No hot water, and those showers lasted like 5 minutes. Good thing I have read the book The Aquariums of Pyongyang before, and if those guys can last 10 years in Yodok, I can last for the weekend without hot water.

Finally, I got my heat turned on yesterday. All that's left is the transfer of my name in the electricity account, and a new stove, washer, and dryer. Those appliances which will be provided by the landlord will come within this week.

So there goes my crazy final week of school. Actually, school is already out, there are no more classes, but the finals are looming in the form of take-home final exams and papers.

So, here is my last picture from my Niagara Falls in the Winter Series. This is about a few meters away from the plunge, but you can still see that the water moves fast. 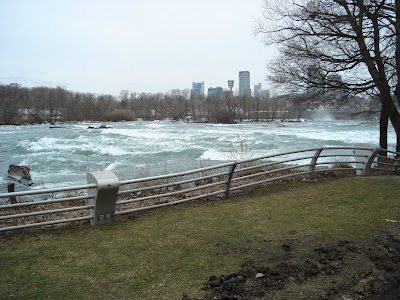