For this day, I also planned another road trip to another location outside of Quito. This time, it would be to La Mitad del Mundo (The Middle of the World). The reason it is called that way is because it is the site of the equator (no wonder the country is called Ecuador, due to the fact that the equator runs through it). Quito is 22 kilometers south of the equator. Thus, in order to get there, I took a tram, and from there, I rode a regional bus. The whole trip one way costs 0.75 USD.

When I got to the site, I saw this. 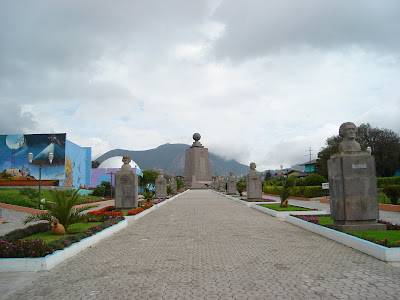 This is the main promenade that leads to the trapezoidal monument that marks the site of the equator. The trapezoidal yet smaller statues that line the sides of the walk are the busts of the members of the French Academie of Sciences that took the measurements and thus proved that this is the equator, indeed, the middle of the world. 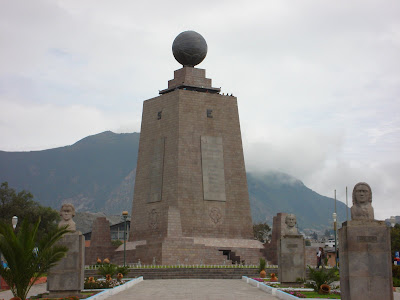 Upon close examination, one could see that one is approaching from the south-eastern side. The big trapezoid that marks the equator actually is a monument-cum-museum. One can enter it and there are exhibits about the different indigenous peoples of the country. Again, pictures are forbidden inside. 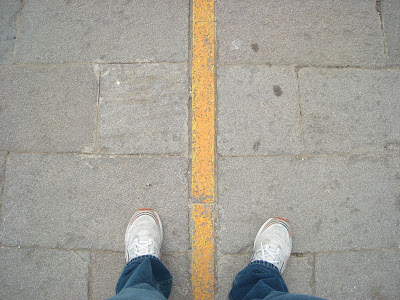 This is a photo of my feet, straddling the equator. My left foot is placed on the Northern Hemisphere and the other on the Southern Hemisphere. So now I can say that I have been in the two hemispheres at one time! Cool fact eh? 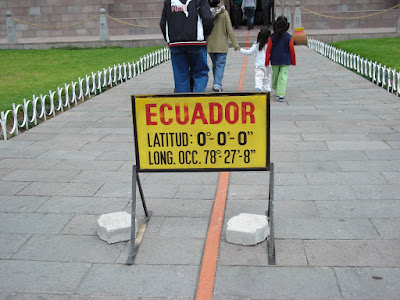 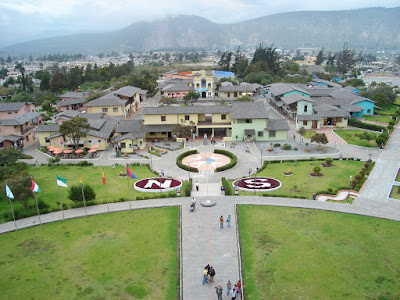 This is a view of Ciudad Mitad del Mundo. This is a "village" at the site of the equator. It is filled with souvenir shops, tour offices, and water and energy demonstrations. Interesting place. This is also where I ate lunch, and ordered another plate of Ecuadorian fare. Again, corn and more corn. 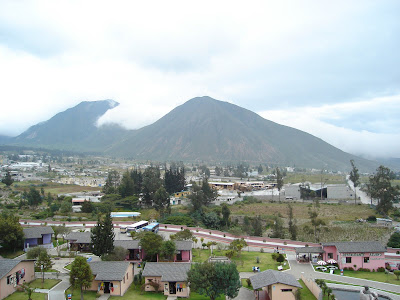 This is a shot that encompasses some of the volcanoes around the site. Since this is in the middle of the Andes, there are plenty of volcanoes in the area. I will be climbing one of them, the Vulcan Pululahua, later in the day. 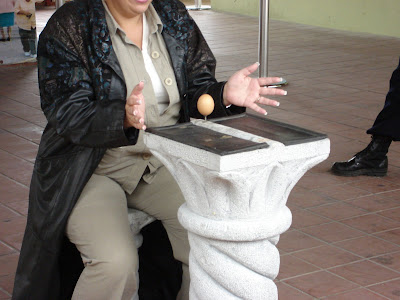 As you can see in this picture, Coriolis Effect is doing work here in the equator. If you get an egg, you can actually put it on top of the head of a nail and it will never tip off and fall. The reason for this is because the gravitational pull of the North is equaled by the gravitational pull of the South. Thus, it cancels out and the egg never falls. 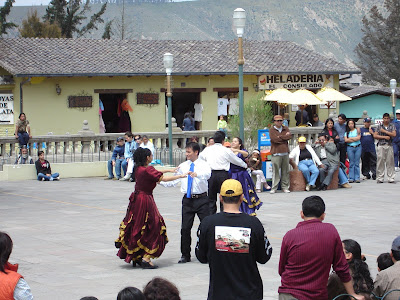 Later in the day, there was a salsa band, and people started dancing, together with these professional dancers that put on a show for the crowds. That's why I decided to go here on a Sunday, to experience a salsa band at the equator. I don't know, somehow, the gravitational pull maybe has put an influence at my head, and the music sounded good to my ears. 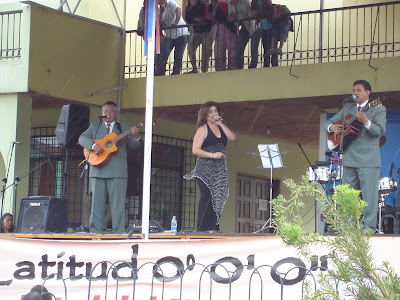 This is the salsa band, with the lady singing and shouting Viva Ecuador! every end of one song. 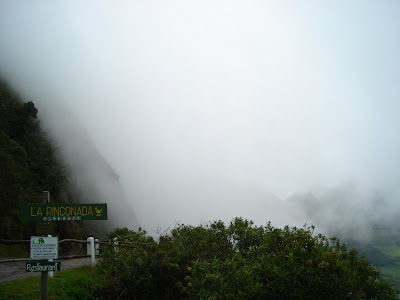 Today was also the day in which I did my first climb. This was the easier one. I climbed Vulcan Pululahua. In order to do this, I signed up with a tour company in the Ciudad Mitad del Mundo, since they have good guides that would lead the way up the volcano. The hike takes about an hour. And the view is great. The picture above is the start of the path. As you can see, the altitude is so high already and the clouds are everywhere, easily reachable by hand. 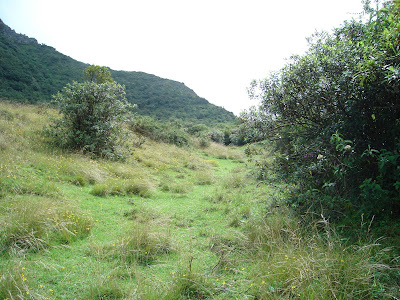 This is a shot from the path leading up. 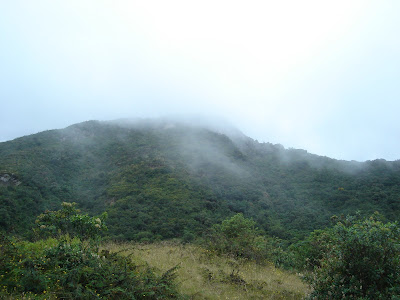 Another shot leading up, showing some lower peaks nearby.

Here are the views from the top. There was a time in which I was literally 6 inches from my death, the path at the top was so narrow, and if I didn't cling on to the rocks, then I would find myself rolling down the steep slope and die. 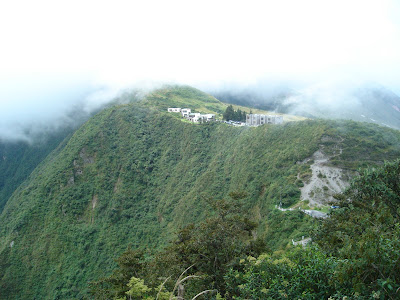 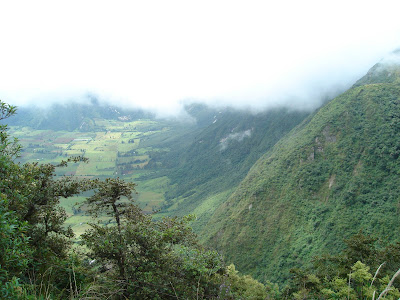 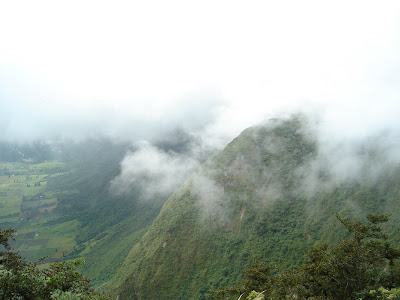 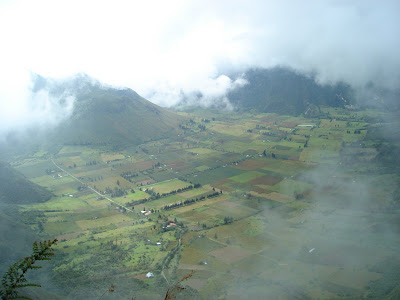 So, after an hour of trekking up the volcano, we came back. It was already around 3:00 PM. And since the sky was getting dark, and a bit scary, I decided to catch the bus to go back to the city. And while in the bus, I experienced an Ecuadorian flash flood. The rain poured so hard, and due to the fact that the city was in a valley, the water flows down the slopes hard and fast. The cars would just stop in the road, because their engines would shut down due to the water flowing inside. So I was stranded in the bus for about 30 minutes, after which the rain stopped and the cars were able to move again.

So I came back to the city, and when the evening came, I ate dinner in one of the restaurants in Palacio Arzobispal again.

So, that was Day 4. Watch out for Day 5, when things start to get a little bit dangerous. It would be LIW's first hitch-hiking experience, and also read about the account of being trapped for one full hour in an elevator in an Ecuadorian church! But for the meantime, enjoy this next photo from my Old Fort Niagara Series. These are some of the barracks that used to store gunpowder, if I remember correctly. Enjoy! 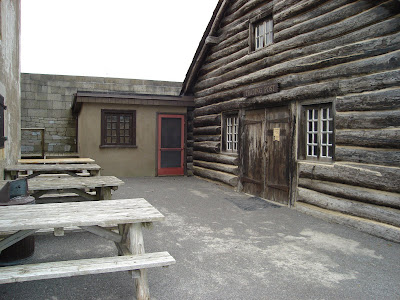