So, after eating breakfast in the hotel, I rode the trolleybus to the nearest bus station. Upon reaching the bus station, I flagged a taxi to take me to the station of the cable car that would take me to Cruz Loma. The cable car is TeleferiQo, and this apparently is Quito's newest attraction. At the complex, there are plenty of amusement areas, restaurants, and other establishments that apparently would provide you some sort of high, especially when it is done in high altitude. Who would think that riding the roller coaster in a high-altitude city is not fun?

Anyway, I bought my ticket to go up the cable car, and so I found myself in Cruz Loma after about 30 minutes. 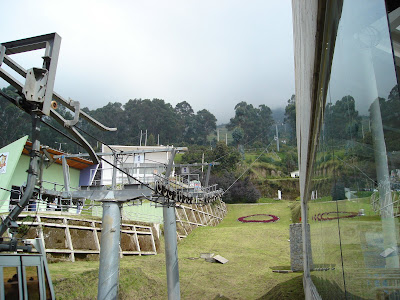 This was the scene at the bottom, right before I would board the cable car. The scenery is still clear, but later on as we gain altitude, the clouds would be all over us. 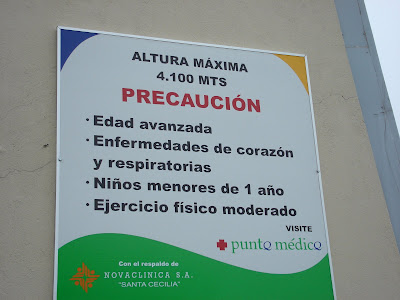 Upon reaching Cruz Loma, there was a warning. Cruz Loma is at 4,100 meters above sea level, and thus the air is pretty thin compared to downtown. That is why the guidebook explicitly warns us never to attempt in climbing the volcano when you just arrived in Quito. Here, the warning sign advises those who are advanced in age, those who have heart and respiratory ailments, and those babies to take things slowly. There is actually a medical base in Cruz Loma for those needing medical assistance.

So, I started the hike up. This would take me three hours, one way. I was behind some supposedly high school students on a field trip. We would all go up to the summit.

The following are some shots along the way. These remind me of a number of things, such as Bates Hotel in Psycho, and other surreal surroundings. 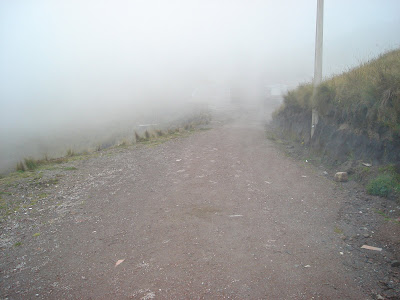 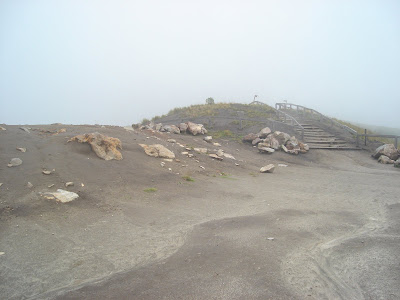 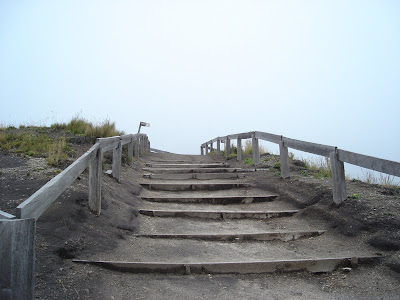 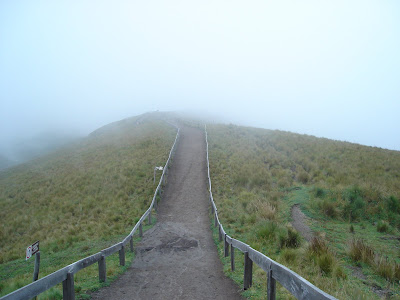 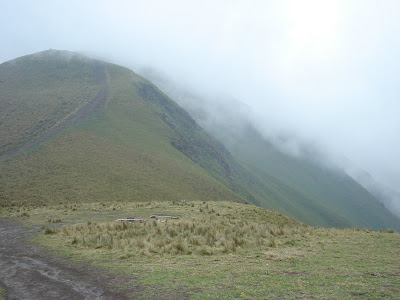 After three hours, you get to the top. It is rather serene, and the feeling that you're 4,680 meters above sea level gives you a different sense of freedom. No wonder people climb the Everest. It definitely is exhilarating. Unfortunately, the clouds are all over the place and there isn't an opportunity to take a good shot of the view. Perhaps the following photo is the best one. 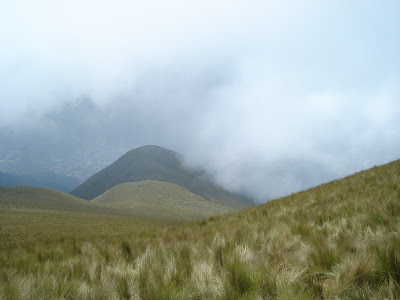 I ate my packed lunch (a couple of sandwiches and bottled water) at the summit, and by the time that I got back down, it was already around 4:00 PM. Anyway, the descent was also interesting. Interesting in the sense that I was interviewed by a local radio reporter for Radio Universal. Apparently he was making a piece about the TeleferiQo, and we somehow ended up on the same cable car on the way down. So, seeing that I am a foreigner and not a Quiteno, he pulled out his tape recorder and a microphone, asked me a few questions (in Spanish of course), and after I tried my best to answer in Spanish, he permitted me to comment on the "beauty of the city of Quito, seen from the TeleferiQo" in English. So I guess the voice of a solo traveler from the Philippines (which, in Ecuadorian eyes, are very far; of course, why would I mention that I am based in the United States, that's too much for my limited knowledge of Spanish) was heard in 1270 AM frequency in some unspecified time. Hehe. That's my first time to be interviewed by mass media. This is his photo. 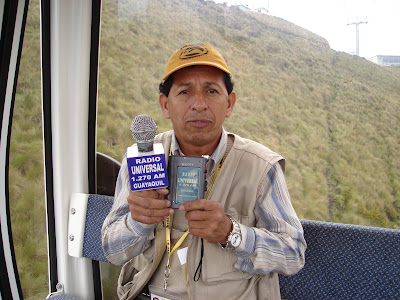 So there you go, this ends my trip report, in six parts. Ecuador was awesome, and what I saw in six days was a mere fraction of the beauty the country has to offer. I definitely recommend going there to anyone with an open mind and a sense of adventure.

Finally, let me continue on with my Old Fort Niagara Series. This is a stone found on the viewing platform towards the Canadian shore. Apparently it is commemorating something. 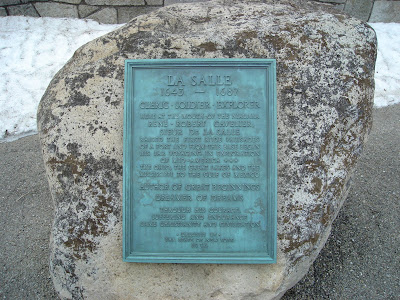