I only got about 6 hours of sleep yesterday. Not really good. But not my choice either.

I was doing my laundry about 10:00 PM yesterday. I was supposed to just leave it in the basement once I get it in the dryer, but somehow the first floor neighbors decided to do laundry as well, so I know that there is a load of clothes waiting for the dryer once I finish. And since I didn't want my clothes to be handled by other people, I patiently waited for them to dry, about an hour later.

Speaking of the first floor neighbors, they are a somewhat interesting bunch. They aren't that noisy, just average. They are five students from East Asia, but I somehow inferred that they are immigrants here in the US granted permanent residence. I somehow deduced this from my conversations with them a few days ago.

Anyway, I don't have anything to complain about them, except for one thing: garbage. They produce a rather large amount of garbage. And not only that, their garbage stinks. I do not know what they put in their bags, I do not know what their eating habits are, and surely I do not know what their garbage-producing habits are, but they seem to be the bunch who cooks food but not finish it. Thus, there are plenty of leftovers that end up in the garbage can. And since the garbage is only collected once a week, these large garbage bags end up in the driveway, subject to the elements of nature. And if it is subject to the elements of nature, it stinks.

I guess my main annoyance is the fact that for five people, they produce an unusually large amount of garbage. Even though the bags are translucent, I can figure out that there are plenty of paper plates and paper bowls, making me think as to whether these people actually use real plates and bowls or not.

Anyway, it is surprising that I am ranting not about my roommate but about other people.

Ok, that's all for today, I have to go back to work. I have plenty on my plate right now, so I better stop at this paragraph. But before that, here is another shot of my Oswaldo Guayasamin Series. This is a sculpture that he did, I believe. 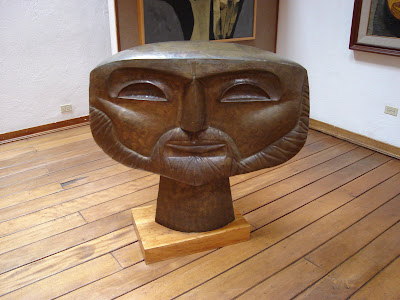