This morning, I didn't set my alarm clock. I just let myself be woken up by the rays of sunshine flooding my windows. Although, in a rather disappointing note, my body clock woke myself up at around 6:00 AM, when the sun isn't out yet, so I grabbed hold of my watch, noted the time, and shut my eyelids back.

About an hour later, as the erythrocytes, leukocytes, and the thrombocytes were flooding the corpora cavernosa, I decided that it was finally time to wake up. So, I languidly walked to the way of the bathroom, and washed my face.

I didn't have a class for today, so I took my time in breakfast. I fried an egg, peeled a banana, and consumed it together with four loaves of bread, a small slice of brie cheese, and a spoonful of grape jelly, washed down with green tea.

I also made lunch in the morning. I made some linguine with crimini mushrooms and parmesan cream sauce. Very rich.

It was around 8:10 when my roommate opened his door and decided that he should wake up as well. He apparently has a class at 9:00 but he was rather not intent in going to school, somehow the motivation wasn't firing. Anyway, he just made some sandwich and packed it in his bag, and went in the shower ahead of me. As I said, I don't have a class for today, so I wasn't in a hurry to go in the shower.

Speaking of the shower, I find it a bit odd that there are four types of soap bars in the shower, but there are only two people using it. I use one of them. My roommate may be using the other three, but it seems that entropy is not working in the soap bars. I better ask him whether he is using them or not, and if not, I might end up using them.

The thing is, my roommate seems to have a rather delicate body. He has a rather narrow selection of foods that he considers tasty, and so, if the food is not in that category, it either ends in the trash or eaten by me. The reason is, I don't want things to go to waste. His aunt and uncle bought a large stack of staple items, like canned goods, tuna, corned beef, among other things. But, my roommate doesn't eat them. He told me that if I want to, I can help myself to it.

The soap in the shower is also related to this. It seems that he bought the soap bars, all from different manufacturers, and my theory is that upon first usage, he found them to be unsatisfying, so he bought another one, and another one. So I will ask him about it, and if he is not using them, I might end up using them. My body isn't Marie Antoinette's, I don't mind.

I find it amazing how different our personalities are. He talks on the phone a lot. I hear him conversing with other people, shooting the wind over the phone, talking about mundane topics. I on the other hand only use the phone when I really need to tell somebody something. He is afraid of heights, I on the other hand is very excited of climbing mountains again this coming May. He has no sense of direction, I on the other hand can find my way even in a foreign country.

I just emailed my Russian friend this morning. I sent him some documents. If it looks good for him, I'll be excited. I know, this paragraph doesn't make sense, but it's suppose to not make sense. At least for now.

My Israeli friend taught me how to make matzah ball soup. It tasted good, the way he made it. If only I can replicate it. Well, I'll try it in my kitchen some later time.

So, one thing that is not random is the continuation of my Oswaldo Guayasamin Series. Let me show you the man himself. 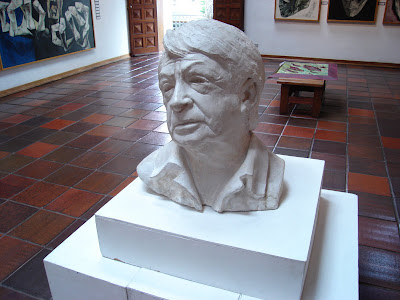