My adviser is hilarious. He is goofy, and he has a dry sense of humour, but it works. Of course, he takes my work seriously and does not laugh about it, and he is a total professional with his interactions with his advisees, but he is a totally different person when he is teaching an undergraduate course.

I happen to know this because I am his teaching assistant for one of his classes.

So for today, we were discussing Phonetics. This topic happens to deal with the way sounds are produced in the world's languages.

Of course, the class starts laughing a bit.

Then he was explaining about the velar fricative, the sound which is the last sound in the German surname Bach. But before that, he gave a wrong example, which was ich. I then pointed it out to him that it is the wrong example because German undergoes palatalization. So, after giving the right example to him, he replies "Oh yeah right, you're correct, because you took Phonetics recently, so you have more mouth yoga experience than me."

Well, I guess that sometimes it is necessary to entertain an undergraduate population. Mainly because not all are taking the class because they want to, but simply because they need to. Unlike in the graduate level, that the reason you are in Graduate School is because you want to be in Graduate School. So you don't need to be entertained anymore.

In the end, I am just amazed at the flexibility that my adviser has. He is indeed quite a character. He can be totally professional to one situation, and be a clown to another situation. He seems like the one who has my personality as well, in the sense that there are different versions of himself to different occasions. Interesting character.

Now, this is the last of my Oswaldo Guayasamin Series. This is a movable mural, which I believe is entitled Los Mutilados, although I might be wrong on that one. One can actually move the individual pieces in different ways so one can create a multitude of possible combinations. 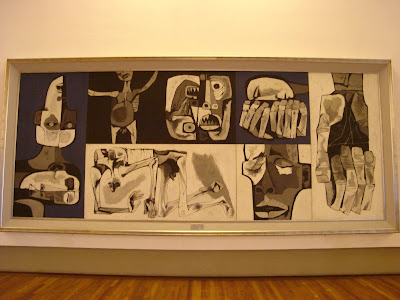