Day 1: The Friendliest People on the Planet

So, here´s the start of my day to day trip report. Some of these were written in Internet cafés with the intent of publishing them when I had gotten back, while the others were written once I got back home.

As I said earlier, my first day consisted of flying to Bogotá, Colombia, and spending 8 hours in the city. So, my flight was uneventful, or rather, well, there were events, so I take that back. I will delineate them later. I got out of El Dorado International Airport, caught a cab, and spent a few hours in the old city.

Anyway, back to the airport, back to John F. Kennedy International Airport. I must say that I haven´t met any citizen of any country who is as friendly as the Colombians. It was a totally different experience. At first, judging from the gathering crowd in JFK, I felt like I was in the middle of a real telenovela set. The machismo oozing from the males, and the scalding hot women. My goodness, just the flight attendants alone, with their blood red ponchos and smart bowler hats, they were definitely arousing. 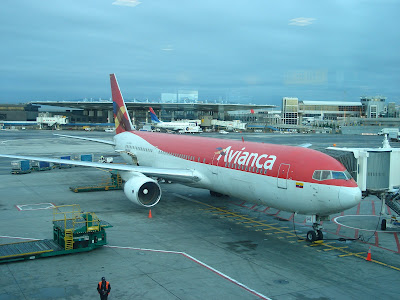 A number of Colombians approached me and talked to me in flight, while waiting to board, and in other places, offering me a seat when they see my huge backpack, and assisting me in filling up a customs declaration form. I´ve gotten to know the life stories of two gentlemen in the flight, one while waiting to board, and another while in flight, none other than my seatmate.

I also happened to have flown with the Vice-President of the Colombian Republic as well, the Colombian passengers were more than eager to point it out to me.

So, at 1:00 PM, we landed in El Dorado International Airport, and I queued for one hour to get my passport stamped. I then caught a cab and headed to Plaza de Bolivár, the huge plaza with tons of pigeons. I took some shots, and proceeded to walk along the streets of La Candelaria, the old town. Of course, after a few hours, I flagged a taxi again, and headed back to the airport.

Here is a street performer in Bogota. 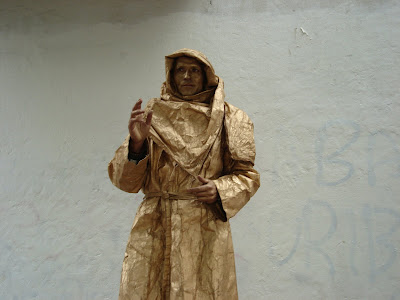 This on the other hand is a detail of some of the majestic government buildings in the Plaza. 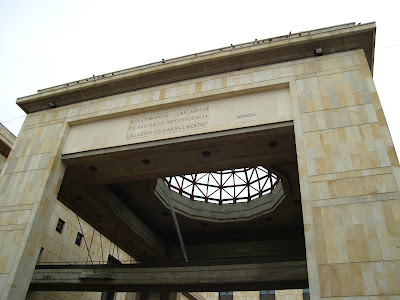 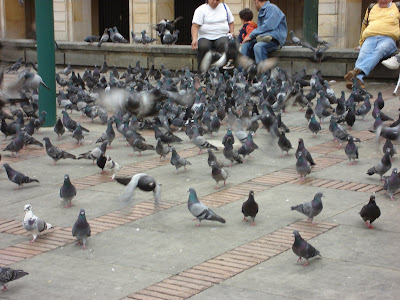 And here is a shot of a typical street in Bogota's old town, La Candelaria. 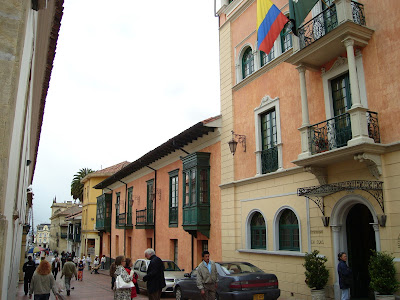 A number of thoughts have crossed my mind today. One, it felt like I was on the wrong continent. Well of course, the passengers of my flight were all holding maroon passports, issued by the Colombian republic. The flight attendant who took my boarding pass saw my passport and uttered "Filipinas..." to which I responded "Yeah, I suppose you don´t see that often in this flight."

The guidebooks say that Colombia is a dangerous country, and yet there was only one time in which I felt unsafe. It was when I was walking on the street in front of Museo del Oro (which happened to be closed, unfortunately). A non-descript man approached me in the middle of the street, in his hands was a white hankerchief, and even though I didn´t look closely, in my peripheral vision, I saw little weird-looking green pills. I am pretty sure those are substances of questionable legality. Of course I declined firmly and walked on.

Otherwise, I love the Colombian people. The taxi driver, using easy-to-understand Spanish, explained the Colombian currency, which has too many zeros to process (The last time I checked, 1 US dollar was equal to 1871 Colombian pesos.). I exchanged 100 USD in the airport, and I got some 165,000 COP.

The sights, the smells, even the way the cars drive on the road, it didn´t seem foreign to me at all. If not for the language barrier, I feel like I would be right at home.

Too bad I only had 8 hours to spend. I will definitely come back. Watch out for my next travel report, when I actually find myself in Peru.