Yes, due to the fact that I woke up yesterday at around 4:30 AM, due to that huge thunderclap, and wasn't able to get back to bed again, I set to work to finish my revision. And guess what? I am done!

I thought I would be bringing this paper with me to accompany me on this trip that I would be making, but it turned out that I do not need to do that anymore. I am finished revising the thing, and I hope that I adequately addressed the problems that the previous version had.

Hard work, yes, but I think it is just fair. After all, this is academic writing, and who knows, this might get published as well later. I remember when I first had a paper to be published, the revision process took a while, and the reviewers kept sending me back comments, to which I addressed in my replies.

But I have to say, it is a good feeling to have one's name in print.

So there, my baby is around, once more, in his third generation. Hopefully, this is the last major revision that I would make, and then after this, my adviser would hopefully pass it on to the second reader, who I suppose will just give minor comments for revision, and then to the third, and then after that, voila! It will be filed and then my record would say that I have that requirement fulfilled!

So there, I am moving along. Wow. I cannot believe time flies that fast, eh? This blog is already on its third year, and still going strong. I just renewed my domain ownership the other day, since I do not intend on closing this blog in the near future. So there, I will still be here, writing, traveling, taking pictures, the whole enchilada.

Just sit back, relax, and enjoy the show. 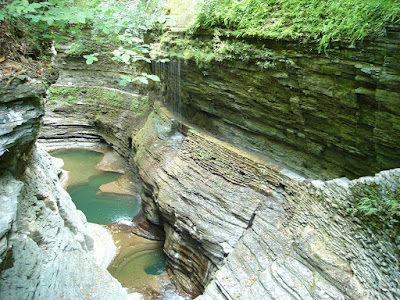 (Rock and Falling Water, from my Watkins Glen Series)