I suppose that Budapest is a city made for walking. The fact that the size is just right, and the sights are strategically placed next to each other in different neighborhoods emphasize this point. So, for the past two days in which I went out sight-seeing, I just walked and walked. I was wearing my hiking shoes; I travel light, and only brought formal dress shoes in addition to the hiking shoes that I had. Of course I wouldn't use my black shoes for sight-seeing, so I used my hiking shoes that I purchased for my Peru adventure two months ago. Good thing I had gel soles which enabled me to go on and on.

Last Friday, we started by taking the streetcar and underground to the Szechenyi Baths. That was our starting point. We took photos of the famous thermal baths, and then moved on to Heroes Square, which was filled with statues of ancient heroes of the Hungarian people.

This is a small castle in the park nearby, which now houses the Hungarian Agricultural Museum. Due to the fact that I had no interest in seeing ancient farming techniques, I decided not to visit the interior. 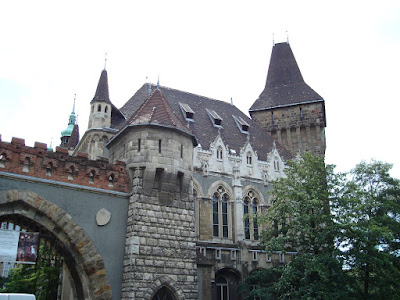 This is Jak Chapel, a small church in front of the castle. 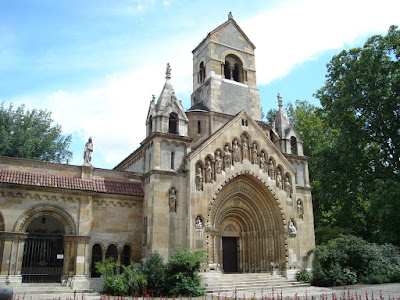 Nearby is the Anonymous Statue, a statue of a chronicler who had no name. The shiny pen is touched by plenty of writers and writer-wannabes here in Budapest, seeking inspiration. 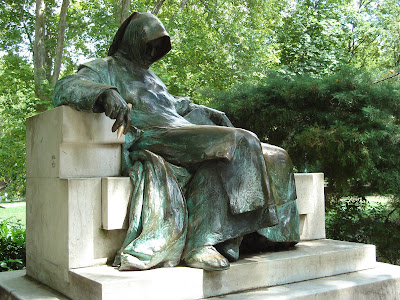 Then, we strolled along Andrassy Avenue, which was full of mansions, some of them acting as embassies of other countries. And when we got hungry, we took the underground until we reached a shopping street, and found a restaurant that was serving Hungarian fare.

Now this made me realize that Hungarians serve food in huge quantities. Perhaps this is the reason why I find more obese people here than in other European countries. Some people theorize that it is because parents feed their young copious amounts of liver pate while they are still babies, but I presume that the people are used to eating huge portions, and this is the reason for the obesity of many people here. It is reflected in the portions in the restaurants I suppose, like having a big bowl (or rather, pot) of soup, having plenty of side dishes accompanying two lamb shanks, among others.

After eating, we went to Margaret Island. This is a strip of land in between Buda and Pest right on the Danube. The whole island is like a park, and there are two swimming pools inside, and a number of recreational facilities. We strolled the whole island, from south to north, and that took us about three hours. It was a rather strenuous walk.

Yesterday, at night, we strolled next to the Danube, and took photos of the Chain Bridge, and other architectural marvels of the city. Budapest is prettier at night, when the darkness hides the gritty aspect of the city, and highlights the beautiful parts instead.

For example, what do you think of the Chain Bridge, as shown in this photo? 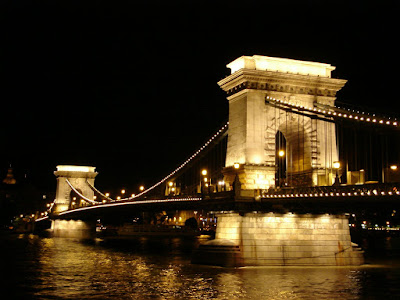 Now earlier today, we strolled on the Castle Hill district. We started on the Fisherman’s Bastion and took photos of the panoramic view below the castle. Then we proceeded to the palace, but opted out of entering it, which now houses the Hungarian National Gallery. I suppose the place is just too big, and so after reaching the end of the castle, we decided to call it a day.

I still have two full days remaining here in Budapest. I am planning to visit some more sites, and do an excursion on the last day, before I fly back to cross the Atlantic and be busy again in academia.