So it's time to say goodbye to wonderful Copenhagen. I spent my last day today walking, walking all over the city. But surprisingly enough, I didn't take a lot of photos today.

So first, I walked over to the northern part of the city to visit the Assistens Kirkegaard, or the city cemetery. I went to see the graves of famous Danish people, like Hans Christian Andersen, and Niels Bohr. I like this cemetery due to the fact that the graves were wide and spaced from each other, not like the one in Prague where I visited two years ago.

After the cemetery, I went to the National Museum of Denmark. This took me a while to finish. It was free admission, and the visit was highly educational, but not photogenic. Well, there are plenty of bones, tusks, prehistoric men in Denmark, bog-excavated skeletons, and other artifacts. But these aren't really good in photos, don't you think?

But, two hours later, I have learned all that I can learn about the history of Denmark, and then I moved ahead. I had lunch in the train station, and then I tried to buy a ticket for the airport trip that I will be taking tomorrow, but apparently, unlike other routes, they don't sell tickets to the airport from the central station ahead of time, you must buy them when you are already traveling. So I will just buy them tomorrow when I check out of the hotel I am staying.

I also visited the Royal Library, which is this huge imposing building next to the waterfront. It is nicknamed the "Black Diamond" due to its black shape. It is another example of Danish functionalism. I liked the building, very modern.

Anyway, I bought a couple of souvenirs for the family, since tomorrow I fly to Budapest to see them. So there, I am ending my visit here in Copenhagen. I suppose this is one of my favorite cities that I have visited, some place where I can see myself living here and actually liking it. Hmmm, let me see if the University of Copenhagen has an opening.

So, I will be sleeping my last night away in my hotel, and tomorrow morning I will check out and head to the airport in Kastrup. I have a flight at noon to Brussels, and from Brussels I change to a flight to Budapest. Ah, the joys and pains of travel. I suppose it is tiring, but I still like it. Travel is exciting, the concept of being in an airport and flying to anywhere in the world is simply mind-boggling. 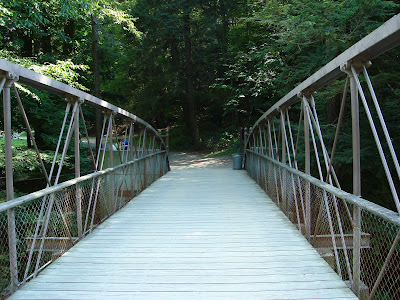 (Crossing the Glen, from my Watkins Glen Series)