I have to write about something bizarre that happened to me this past week. But in order to tell that, I have to rewind all the way back last Tuesday.

Last Tuesday, a friend and I were in the dining room of a supermarket. You know, those American huge supermarkets that have an eating area, somehow similar to a food court. We were having dinner, as it was mid-evening, and things aligned so that we found ourselves eating there. While eating, some unknown phone called me, and wanted to set up an appointment with me to discuss something with my insurance.

Now, I immediartely felt uncomfortable discussing my schedule to a stranger on the phone. So I told her to call my office, and she does have my office number, and then we set up an appointment to meet sometime.

That time happened to be today. I remember filling up a small yellow card designating my father as a beneficiary suppose something bad happens to me. Apparently, due to the fact that I pay union dues by being a graduate student employee, I get this sort of benefit. And since I didn't have to pay anything else aside from the fixed amount of money that they take every time I get a paycheck, I figured it would not hurt if I do this.

So they contacted me, and explained the benefits. Apparently, if I die, or if I lose my hands, or if I lose my feet, or if I lose the sight of my eyes, then my beneficiary gets 2000 US dollars. Wow. 2000 dollars. That's how much my life is worth. It hits you in the head, isn't it?

And since the lady was already in my office when she was explaining this, she also offered me a funeral plan. If I sign in this one, I would have to pay 9 dollars per week, and that would secure my funeral plans. Apparently, a funeral costs something between 5,000 to 15,000 dollars, and the 9-dollar-a-week plan will give me 12,000 dollars to spend. I would have 12,000 dollars to spend in finding a burial mound, how beautiful or ugly my coffin would be, and I suppose, I could also use that in selecting what flowers they would display when I am dead.

It sounds funny, but come to think of it, that's reality. She also explained about how to make a will, beneficiaries, and talk about what my preferences are whenever I am dead. Would I want to be cremated or buried? Would I want my ashes scattered along the Niagara River? What type of ceremony would I want? Apparently, this is in order not to give trouble to the people I would be leaving.

Wow. I am 26 years old. Healthy, with no chronic health problems. And yet reality knocks on my door by virtue of this experience. I didn't sign up for the funeral arrangements, since I don't think my legacy needs it yet. I am just a low-earning graduate student, I don't have a lot of assets yet, so I decided to postpone it.

However, I do realize that sooner or later I would be dead. Like the rest of us. 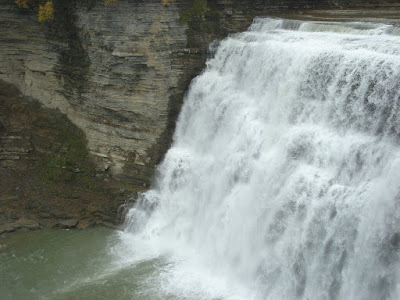 (Waterfalls, from my Letchworth Park Series)