So, I am back in town. After a week's worth of silence, I am blogging again.

I am here, sitting in my office, and taking a little break. After this entry, I will have lunch, perhaps, and then go back to work. After all, another person in the department who came into the program the same time as I did is already defending her dissertation proposal this week, so I must catch up.

Time to shovel extra coal into the locomotive, boys!

Anyway, I should talk a little about my trip, which just ended yesterday. We were on the road for nine days. The last time I blogged about it, I was in Charleston, West Virginia. We spent a day there, where we toured the Governor's Mansion, and the State Capitol as well. One impressive thing about this state is that people seem to be so relaxed about security. There wasn't a single metal detector that one will pass upon entering the capitol building. One can simply waltz inside the building and that's it!

Anyway, we were there for just one day, and later we proceeded to Pittsburgh, where we stayed for 3 nights. My friend has family there. Pittsburgh is a nice city, but with lots of hills. After that, we were on the road again and passed through Gettysburg, where we drove around the battlefield. This part of the country happened to be a very important battlefield back in the civil war. Then we spent three nights in Reading, where we stayed in a friend's house. We drove to Philadelphia and saw the great art museum, and then we also hung out with our friend's kids, doing nothing, watching a couple of movies, and playing origami.

So, that was my Spring Break. I am now back here in my office and in need of work. I have a pile waiting for me to read, and I also have a proposal to compose.

Pictures of the trip will be posted later. 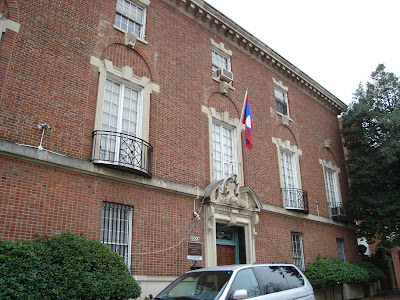 (Embassy of the Lao People's Democratic Republic, from my Embassy Row Series)