So, yesterday, I was in the apartment all day long. The reason was because my roommate moved out, and I decided to clean up his wake. I started with my bedroom, and then the corridor, and the two other rooms. I am still not finished, with the kitchen, dining room, and his old room not yet done.

I like my clean bathroom, though. It is now blue, from a former brown. I changed the rugs and the shower curtain, and replaced the curtain liner with a new one.

I am glad that my old roommate moved out. I didn't like his cleaning habits, because there were none. I suppose I do not have luck in finding good roommates. This has been the third roommate that I had, which did not take the initiative in cleaning. He treated the apartment more like a hotel than an apartment. When he left, he didn't even try vacuuming his room. Just that, pack up and leave. But I figured, that would be better, because I would rather be careful in cleaning his room, because who knows what he left in there, the vacuum cleaner might break.

So yeah, I will finish cleaning the apartment, and then look for a new roommate. I am not hoping for the best for this one. But who knows, I might be just here until December, but hey, that's not yet official.

In the meantime, I am back in my office, listening to Dmitri Shostakovich while I read my articles. His string quartets are really awesome in case you are curious. 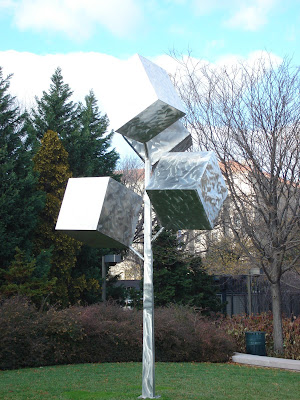 (Silver Cubes, from my National Gallery of Art Series)