So yesterday, I took the Amtrak train from Seattle to Portland. It was my first experience with Amtrak, and I didn't put my hopes up, given the fact that I heard that Amtrak was chronically late, and things like that. However, it actually turned out fine, it was on time, and it provided a service that was compatible with the European trains that I have experienced. Perhaps the Amtrak Cascades service was just a good one.

So I got into Portland, and found my hostel. It was again, a very good hostel, but the ambience is different. I suppose that is just expected: Seattle and the hostel I stayed there has a different personality compared to Portland and the hostel that I am staying here.

Let me describe the hostel first. In Seattle, I stayed in a room that slept 8 people. These people can be talkative, and they usually introduce themselves and ask fellow travelers their personal stories: why they are in Seattle, where they came from, where they are going to next, and so on. All in all, the people in the Seattle hostel are friendly: hey, I met an Israeli and within a few hours, we were already doing a bar crawl.

Here in Portland, people are a little kept to themselves. I am sleeping in a room that sleeps 10 people, and yet the only communication I had with them is limited to a single person, the person below me in the bunk bed. And even that, it is limited to a simple greeting.

There are activities that the hostel in Seattle hosted, like a city tour, bar crawls, bonfires on the beach, those sort of activities that foster friendships and camaraderie among the fellow travelers. Here in Portland, there are activities such as those, but the staff aren't too open in advertising them. Perhaps they aren't so pro-active as the people up north.

Not that I am complaining, but I am just noticing the difference.

Let's talk about the city as well. Seattle has a very vibrant neighborhood, and perhaps as can be read from my earlier posts, I have enjoyed Seattle very much. Portland is a different thing. It's not that I hate Portland, but it takes some time before one likes Portland. Portland's transportation system is awesome, I haven't paid a cent yet, due to this Fareless Square that they have. Portland seems to disdain chain stores: unlike Seattle, which has a Starbucks in almost every corner, Portland has more local and homegrown cafes. There are Starbucks in Portland, but somehow, they mysteriously close early, as early as 5 PM. I still do not know why.

There are plenty of restaurants in Portland. Portland natives seem to have a very interesting gastronomy habit. They seem to like to eat a lot. And another thing, Portland seems to activate my gaydar more than any other city. It seems that for every 5 minutes, I would be able to spot a gay or lesbian couple (not just singles, but couples). I still do not know how to explain this.

Anyway, for today, I walked all over downtown. Portland is a very walkable city. I visited the Classical Chinese Gardens, and that was very tranquilizing. I also strolled the Portland Saturday Market, and bought souvenirs for the women in my life. They also have plenty of street food, with food ranging from Mexican tacos to Tibetan dumplings. I also went to the Voodoo Donut, and also visited some of the buildings in downtown that were featured in the Amazing Race. Finally, I also visited Powell's, which is this huge bookstore that occupies a whole city block. Browsing for books is just an ordeal, since the whole store has maps that are very detailed.

So yeah, that's my stay in Portland for the moment. I still have tomorrow and the morning of the day after, before I fly back to Buffalo on Monday evening. 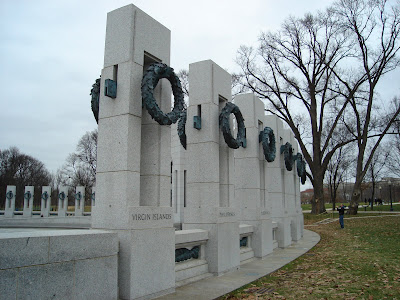 (Wreaths for the Fallen, from my DC Memorials Series)