It's less than two weeks before I take a little break from my work. I am excited. On August 18, I will head out to the Pacific Northwest, spending a half-week in Seattle, then taking the Amtrak and crossing state lines, and spending a half-week in Portland. It won't be a long vacation, like the trips I took to South America a year ago, since I really am short on time. But, at the same time, I need my brain recharged and so I suppose getting off my work for a week would be a great idea.

So, my plan involves chasing after coffee and microbreweries. Apparently, the area is known for that sort of stuff. I am planning on seeing various art and architectural venues, plus some historical chateaus (you never know) and other locations, such as the Pittock Mansion (which was the final destination in some season of the Amazing Race) and Fort Vancouver Historic Site. I'll also have a chance to practice my outdoor photography skills, since Portland has tons of outdoor scenery and gardens that can be pretty to look at.

Anyway, usually, when I am flying somewhere, I would post pictures of aircraft that I would be taking. But I suppose I will not do that for the time being. I'll do something different. See, ever since I discovered that I can actually do this, I have been recording my flights. After this trip, I will have taken a total of 79 flights. I would have spent 297 hours and 33 minutes flying, which is equal to 12.4 days, equal to 1.8 weeks. I have taken 15 intercontinental flights: Asia to Europe and back, Asia to North America and back, North America to Europe and back, and North America to South America and back.

I will have traveled a total of 130,957 miles or 210,755 kilometers. That distance is equal to about 5.26 circumnavigations of the earth, a little over halfway the distance to the moon.

My longest flight still is the Manila to Los Angeles flight that I took 24 years ago, while the shortest flight I have is a Cleveland to Buffalo flight, which was just 308 kilometers, flown in just 37 minutes. So far, my flights' average distance is 2,668 kilometers, which translates to 3 hours and 48 minutes.

Buffalo Airport leads the top spot of airports that I have taken off from or landed to. Manila International Airport was debunked just recently. American Airlines leads the top spot of airline that I have flown the most. Buffalo-Chicago is the most flown route. And finally, the Embraer ERJ-145 is my most boarded aircraft. This reflects the fact that Buffalo isn't a major airport, and most of the airlines that fly here utilize regional jets.

I have taken off from and landed to 40 different airports, used the services of 22 different airlines, 17 different aircraft types, flown a total of 70 routes, in 18 different countries.

Ok, geeky moment over. Until next time. 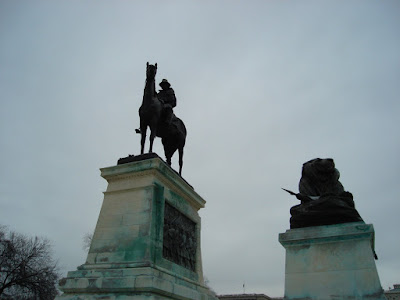 (The Statue, from my DC Memorials Series)