So, I found this news article about the changing habits of Americans when it comes to spending. It had something to do with the current recession and how the spending habits have changed. This article points out how different the behavior is of Americans coming out of the recession this time around compared to previous recessions.

What I find interesting is the fact that the article implies that Americans, until now, have been spending freaks. That they have all this stuff that they buy, simply because they want it, not because they need it. It gives me the impression that Americans as a whole do not know how to budget their resources, that they do not have a clear idea of what they can and cannot afford, and instead, just throw everything to the wind when it comes to the word "credit".

Really? Is that what it really is? No wonder there are plenty of American families who got hit with this recession and got traumatized, because they had to tighten their belts and change their spending habits drastically. I am no economist, nor a sociologist, but I find it hard to understand how people think when it comes to money. Do they save it, or do they spend it? Do they simply buy what they can afford, or do they think that money will come later so it is okay to buy something on credit?

I suppose there is the reasoning that when one has a little money right now, it would be wiser to buy what one wants at the moment, since this chance may not come up later in the future. But is that the right reasoning? What happened to thinking that the available money right now is better saved because there may not be enough money later? 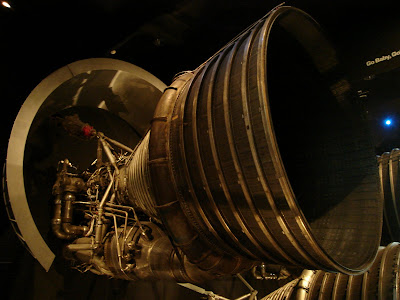 (Dark Rocket Engine, from my Air and Space Museum Series)