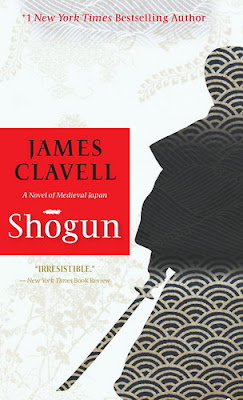 Wow. I didn't realize that the last time I wrote a book review was a month ago. Yes, it took me a month to read and finish this grand epic. I remember buying this book from a bookstore in Seattle, and was captivated by it. So, how do I begin?

This book is about the story of a bold English adventurer who found his way to Japan, and his adventures with Japanese feudal society back in 1600. He encounters an invincible Japanese warlord, and a beautiful woman that becomes his interpreter, and later on, lover. It details many aspects of historical Japan, including the trade between the Portuguese and the Chinese, aspects of Japanese society such as the courtesans and the geisha, samurai methods and customs, sex practices in historical Japan, among others. It is a very meaty book in my opinion.

So, what did I like about this novel? I like the fact that James Clavell seems to be a very successful storyteller. He captivated my attention during the whole book: I never had a moment where I thought that the book was boring. I remember reading Les Miserables by Victor Hugo and though I have respect for that book, there were times in which it felt more like a history textbook than a novel. This book, on the other hand, even though it is historical fiction, is full of action among the characters of the book.

With a book this thick, Clavell made the choice of developing multiple main characters. It is not just John Blackthorne who is the main character, but also Yoshi Toranaga and Toda Mariko. This book also provided me with the insight to Japanese politeness and the theory of face. The characters were crafted in a way that their actions always preserved or destroyed the face of their interlocutors, depending on their intentions. In this way, I admire the amount of research that the author must have put into when writing this book.

Another aspect of this book that I liked is the intricate descriptions of war theory and espionage. There might be actions that are not explained at the outset when they are described, but every loose knot is always explained later on. The last 20 pages in fact are very crucial, because all of the unexplained scenes are finally revealed, such as the sabotage of Blackthorne's ship, the arrangement between Mariko and the rest of the shogunate, and so on.

The book does not provide a very conclusive ending. It is not a fairy-tale story, where the ending is that everyone lives happily ever after. Instead, it provides a road for further exploration, which is indeed the intent of the author. In fact, this is the first of six books in his Asian Saga, a collection of books that talk about the Far East. In fact, I liked this book very much that I already have the copy of the second book, Tai-Pan. I won't pick that up for the time being though, since Clavell's books tend to be long, and I want a break from the Far East.

All in all, this is a very recommendable book. It will totally engage you. Pick it up and be immersed in a dynasty 400 years ago. 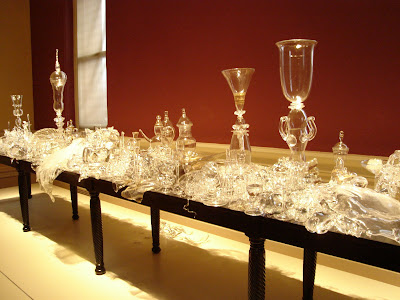 (Melted and Broken Glass Exhibit, from my Lafayette Square Series)