I don't have a movie review series, and I do not plan to start one (but who knows, I might change my mind), but this film just provoked me to write a review simply because it is significant enough to have caused some processing difficulties in my head.

So, let me begin by saying that Slumdog Millionaire is a movie that for the most part, touched plenty of people. When it was released a year ago, I had plenty of friends raving about it in Facebook, about how it was very good, and very touching. And only recently have I had the chance to find out about it, since I usually do not do something simply because everybody else is doing it.

So what is this story about? It is the story of an 18-year old chai wallah (from what I can tell, the term refers to the tea deliverer in an office setting, reminding me of the function of the entry-level Japanese secretary) who became a contestant in the Indian version of Who Wants to be a Millionaire. The thing is, he got every answer correct, and he is one question away from the grand prize. The show went overtime, and so he had to play the last question the next day, but in the meantime, he was arrested and tortured because everyone thought that he was cheating. The film later shows that he knew the answers because of his previous life experiences as a slum dweller.

The film had plenty of scenes intended to pull heart strings: the young Jamal diving into the shit pit just to get an autograph from a famous film star; the Hindu-perpetrated Muslim genocide; the deliberate blinding of a beggar boy by a gangster just because he sings well and that blind beggars earn more; and the various scenes that occur between Jamal's love interest Latika ranging from when they were toddlers until the present. Of course, if the viewer is bombarded by these scenes that were designed to induce pity, then sure, the viewers are just going to swoon and fall over.

The movie is trying to be cinema verite: I have not been to India at all so I do not know the state of their slums, but I can picture the Philippine equivalent to it. Heck, when I was an undergrad, I rode a bus and every morning, we would pass by the railway tracks which is parallel to the highway that the bus took, and the whole railroad is a slum complex, since people build squatting tenements next to it, and poverty is just everywhere. This part of the movie I actually liked: it did not try to season the portrayals to be vanilla, as they say.

What is unrealistic, however, is the whole story. From rags to riches, and he gets the girl at the very end, what is this? An Indian version of Cinderella? I also did not like the whole premise. The movie asked a question at the very beginning, in the form of the game show. An Indian slum dweller contestant in a game show gets all the answers correct. How did he do it? The choices were whether he cheated, he had an accomplice, or whatnot, and the final and supposedly correct choice was that it was written. Written where? Destiny is a focal point in the movie. The movie pushes the idea that it was written somewhere, in the stars maybe, that this person would progress from rags to riches, and get the girl that he wants. This is the most disturbing part of the movie for me.

I do not believe in fate. I may use the metaphor the stars aligned well from time to time, but I do not believe that my future is controlled by the stars. I control my future. In fact, I modify that metaphor by saying sometimes that I am making sure that my stars align right if I have a task to do and arranging things can be complicated. I like to believe that I control my future. In the game that is called life, nothing is pre-determined. Players like me have some control over what can happen in my future. Of course, there are unknown factors and chance and chaos, and for all that is said, I might be dead tomorrow. Who knows? But nothing is ever written somewhere, because if it were, then all I am doing right now is moot. I might as well sit back and relax, since if it is written somewhere, it will happen one way or another.

Overall, I was not impressed with the movie. I want movies that would make me use my head, and that would make me think. This one purely appealed to the emotion, hoping that the viewers will take pity and fall over. I think I am more rational than that.

Oh, and I suppose I won't even comment about the corny abrupt mood-changing dance sequence at the very end, which I suppose is in there, otherwise, it would not be an Indian movie. 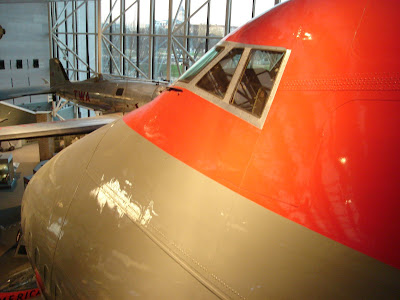 (Northwest 747, from my Air and Space Museum Series)