So, I visit Sidney Snoeck's photoblog, and somehow, I came to realize that I still have a lot of things to know about the Philippines. Sidney is an amazing photographer who is from Belgium who somehow found his way to the Philippines. He takes pictures that are very realistic of Filipino culture, to the point that sometimes I think that he is more Filipino than I am. After all, he has seen and photographer the Ifugao tattoos (which until now, I had no clue of) and the Pahiyas festival in Quezon.

Which brings me to the thought that most of the time, regardless of where we are from and what our citizenship is, we usually forget to explore our own turf. We are so eager to get out and collect border crossing stamps and brag that we have been to places that our friends haven't been to yet, and increase the number of countries that we have visited, and yet sometimes we forget to look back where we came from.

The same thing applies to myself. So far, I have been to 18 different countries and territories, and have taken photographs of my escapades and adventures in these countries. However, I cannot really say that I have traveled the Philippines up and down. There are plenty of things to see in the country, and yet the only places I have been to in the Philippines are countable by just the digits of my left hand.

I would like to change that. It would be great to just get a one-way airline ticket to the northernmost part of the country, say Laoag, and fly there. From there, one could just work one's way heading south by ground transportation, passing through the mountains and the rice terraces, and seeing the native ethnic groups. I could imagine a trip of at least 2-3 weeks following this route. And this isn't even touching the numerous islands found in the central part of the country.

Now if only I have the time to actually do this. 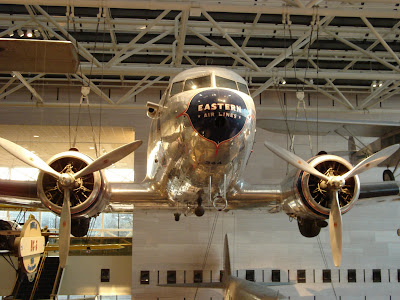 (Eastern Air Lines, from my Air and Space Museum Series)