So I was cleaning my office shelf yesterday, and while I was doing that, I found a very interesting piece of paper. It actually turned out to be the handout that I got for a talk that I attended in Berkeley, CA earlier this year. I was attending the 35th Annual Berkeley Linguistics Society and one of their guest speakers was Laurence Horn, who delivered a very interesting, and not to mention entertaining talk on negation, or rather, hypernegation. Thus, all the linguistic tidbits that I will be presenting in this entry are all courtesy of his handouts. And I should say right at the outset, that wow, he cites all of his sources, from Illinois politician Blagojevich to Mick Jagger.

Anyway, remember math? When you get a negative number, and multiply it with another negative number, the sign becomes positive? One would think that language would behave similarly, but in fact, that is not the case. Surprise surprise. Hypernegation refers to the fact in which there appears more than one negative marker in a certain proposition, such as a clause or a sentence. So, if language behaved like math, then this is what Horn calls duplex negatio affirmat, where the presence of two negatives cancel each other. He however does not cite any examples at least, which suggests that this indeed does not happen in language.

What is more common is duplex negatio negat, illustrated by the Mick Jagger song "I Can't Get No Satisfaction". Jagger surely did not mean that he gets satisfaction.

There's also the cases called duplex negatio not-so-affirmat, illustrated by people saying "not uncommon" which doesn't mean "common" or "not infrequent" which does not mean "frequent". He cites a 2000 episode of The Simpsons which featured an exchange between Bart and Homer, which went like this.

Homer's statement is usually interpreted as that he is doing something with toads, but not exactly licking them.

What are the other types of hypernegation? Well, one of the interesting ones is what Horn calls triplex negatio confundit, and examples include the following snippets.

"No detail was too small to overlook."
"There's nothing I don't ever wish I didn't say."
"I can't say I don't blame him."

So these examples, do you guys understand these? Or did it just confuse the heck out of you?

So what does this tell us? Language, no matter how systematic it may be, still has plenty of seemingly illogical nooks and crannies. Plenty of people have attempted to formalize language, and I have to say, I have been one of them, at least, I have attempted to do a formalistic description of certain linguistic phenomena in the past. But still, language can be bizarre, which draws the line between formal and natural languages. 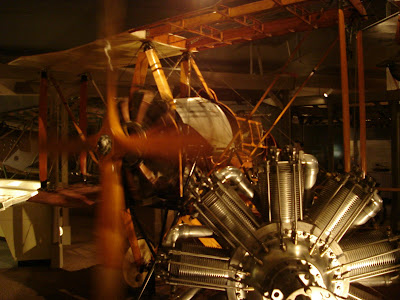 (Red Engine, from my Air and Space Museum Series)