Why Major in Philosophy

So, when I was a freshman in college and had to choose a major, I weighted all these things and thought about what I should major in. I had a set of constraints, and looking at the list of the possible majors in the university I was in, I did an elimination. I wanted to go to music, but I didn't pass the audition, so that was out. I didn't like doing math at that time, so I eliminated a huge swath of majors that needed higher-level math. I also was speaking three languages at that time, so I figured, I might as well study linguistics. It turned out that I liked what I was doing, and so I guess I became the second type of student. I never really thought about whether there is big money in linguistics or not. (Honestly, there isn't much: it's not like nursing or computer science)

Eventually, while in graduate school, I shifted my focus slowly from a pure theoretical linguistics background, to a more of an interdisciplinary approach to the study of language. I started dabbling in psychology, and so I learned how to devise experiments, and I learned how the brain works when it comes to processing language. Now, I guess, this broadens my opportunities. I could work on cognition labs now. I can say now that what I do have scientific and psychological reality. Unlike when I was in undergrad that I was working with language models that well, seemed like magic.

Anyway, to conclude, I was walking the halls of the university one night, while posting fliers for my experiment, when I saw a flier posted on top of a water fountain next to the main office of the Philosophy Department. It read like this:

Premise 1: This is the best drinking fountain on campus.

Premise 2: Majoring in Philosophy is the best and easiest way for you to maximize your opportunities to drink out of this fountain.

Premise 3: Maximizing your opportunities to drink out of this fountain is sufficient reason for majoring in Philosophy.

Conclusion: You should major in Philosophy. 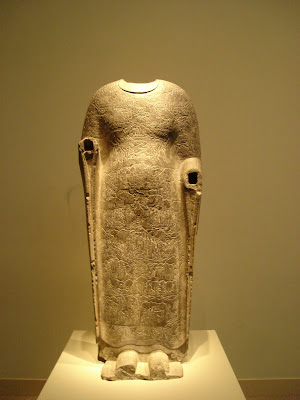 (Headless Robe, from my Sackler and Freer Collection Series)