Sex, Violence, and the American Culture

So, for the past few days, there have been plenty of opportunities for me to wonder about this topic. See, this past week, the school newspaper released the Sex Issue, and it tackled plenty of topics relating to sex. The front page even included a suggestive picture of a couple going at it inside a lecture hall.

Of course, that generated plenty of opinions, both good and bad.

Another example of sex generating plenty of opinions was when Janet Jackson had a wardrobe malfunction, and she exposed her breast accidentally during a SuperBowl program a few years ago on National TV. That was a major event, and people made a big deal on how that was inappropriate.

Now isn't that bizarre? American culture shuns sex as if it is the plague, while they are so lax when it comes to violence. The last time I checked, sex does not have to be malefactive, but violence is always malefactive. Nobody gets hurt if one exposes a breast, while blowing up someone's head is a manifestation of killing someone.

The question is now that why is it that a natural bodily function such as sex is so frowned upon by this Puritan society, and yet a very unnatural function such as the various forms of violence is perfectly okay in this society. It is very puzzling indeed. 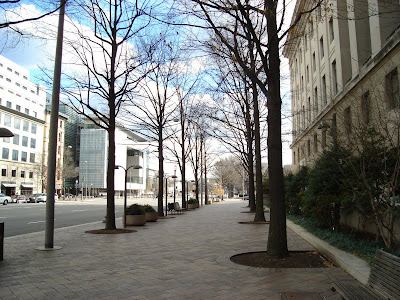 (Streets of the Capital, from my DC Buildings Series)