The other day, I was in the lab, since I had to be there to do my two-hours weekly duties, running experiments on participants. However, while I was there, there were other things to be done, such as alphabetizing a huge stack of old Informed Consent forms.

There were two folders of old Informed Consent forms. Whenever a participant comes in, we go over the legal aspects of research, and they have to sign an Informed Consent form, in duplicate. One goes with us, the other goes to them. And since this is a big lab with participants coming every day for the whole semester, it accumulates quite fast.

It was funny alphabetizing them. There were post-it notes everywhere in the lab, from the letters A to Z. Three people were there, doing this musical chairs dance, having a pile of papers on their hands and just dumping the papers on the relevant stacks. It was quite an interesting feat, sort of a work out actually, since we were moving all over the room arranging the papers in the different stacks. And once we were done, then they would go in a neat alphabetical pile.

I don't know why, but I found that a little fun. It was different from what we were usually doing, so I didn't mind it at all.

Oh, and some good news. This is the last photograph from my Hirschhorn Museum Series. 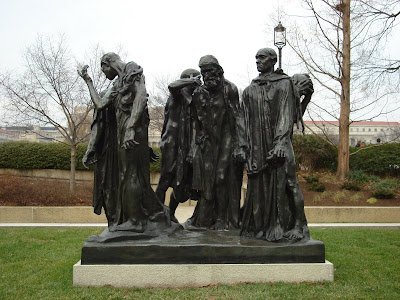 (Burghers of Calais, from my Hirschhorn Museum Series)