So I am a little behind from watching my favorite show on the planet, The Amazing Race. I just finally watched the first episode. I know, I am 3 weeks behind.

But anyway, upon seeing the first episode of the current season, I am reminded at why I like this show. Because it showcases the amazing characteristics of various things.

First, the excitement. I always get excited at the thought of travel. There are these 11 teams, starting from Los Angeles, and they find out that they are heading to Santiago de Chile. Wow. To fly like that halfway around the planet into a different hemisphere, I suppose the excitement in flying will always be with me, no matter how often I do the route. It just has something to do with experiencing something that is not in the ordinary. Heck, I am flying back to Manila in a couple of months, and I am getting excited, partly because this is the first time I am flying via Alaska!

Second, the amazing stupidity of some Americans. I always enjoy seeing the faux pas and the blunders of the contestants. So, one contestant apparently was in a beauty pageant, and she was asked why 20 percent of Americans cannot even point where in a globe the United States is, and her answer was so idiotic. Wow. Another team figured that since they were going to Chile, they needed to change money, but they changed it to Brazilian money, not Chilean! Another team decided to just barge in a house and trespass and paint a wall when they were instructed to paint an outside wall, thus not following directions. What were these people thinking? It seems that their brains are turned off. It's as if they don't realize that there is a whole world outside their backyard!

In any case, I love this show. I love the sights, and it gives me ideas on where to head to next when I find the time to traipse the world yet again. 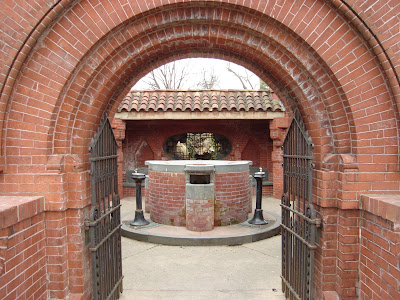 (The Well, from my Capitol Hill Series)