I am heading to New York City sometime this weekend. I will be meeting my sister again and bunking in her apartment, and I haven't seen her since September. Apparently, she has some souvenirs for me from her recent trip to the Philippines and Taiwan.

Speaking of which, it is interesting when one's family members are living in different parts of the world, and the way things are moved around.

One example I have in mind was when I went to Ecuador in 2007. I bought a couple of ethnic scarves for my mom and my sister, but at that time, my sister was living in the Philippines, and my mom was living in the Czech Republic. So, I bought the scarves in Ecuador, and took them with me to Buffalo. Four days later, I was scheduled to fly to Manila, so I took the scarves with me. I gave them to my sister, who was scheduled to fly to Prague a week after I arrived in Manila, so she took the scarves for my mom so she can give them to her.

So, my mom's scarves traveled about 18,579 miles from Quito to Prague, via North America and Asia. It passed through a total of 9 airports.

A simpler (note: this is a relative term) case was when I bought a poncho for my mom in Cusco, Peru. This time, I was delivering it to her personally. I bought it in Cusco, which I took back to Buffalo via Lima, Bogota and New York City. A month later, I was scheduled to fly to Scandinavia where I had attended a workshop. I flew to Copenhagen via Chicago and London-Heathrow. After the workshop, I flew to my parents, in Hungary this time. So I flew to Budapest via Brussels.

So, my mom's poncho traveled about 10,520 miles from Cuzco to Budapest, via North America. Again, it passed through a total of 9 airports.

I find it interesting to see how goods are moved here and there. And with a family that has members in various corners of the globe, it indeed is an interesting path. 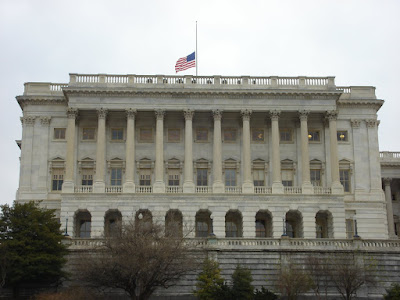 (One-Half, from my Capitol Hill Series)