There are three things about this country that I lately came across to which I find disturbing. And due to these events in various parts of the United States, I gradually am doubting whether I am still in the United States of America, or whether this country is slowly transforming into an Orwellian society, something that is dystopian and where groupthink is prevalent.

Fact Number 1: Arizona has recently passed a state law which is characterized as the most severe anti-immigration law in decades. Arizona State Bill 1070 makes it a crime for an alien to be in the US without proper documentation (which is reasonable), but it also requires police to make an attempt, if practicable, to determine a person's immigration status if there is a reasonable suspicion that the person is an illegal alien. What does this actually mean? This means that virtually every non-Caucasian person is subject to questioning and harassment in the state of Arizona. This is reminiscent of the Gestapo back in WWII checking every civilian's papers. Arizona thus becomes a police state, and even though the authorities say otherwise, it becomes so much easier for non-Caucasians to become victims of racial profiling. I predict that there would be a high correlation between skin color and questioning incidents once this law has been enacted.

Fact Number 2: Oklahoma just decided that doctors cannot be sued if they opt not to disclose information from a pregnant mother if they think that doing so might lead the mother to want to have an abortion. Thus, if the doctor sees something abnormal in a fetus, the doctor can hide that fact from the mother and just tell the mother Everything seems to be fine, thus lying to the mother about the real state of affairs of her child. This is also the same state who requires mothers to view an ultrasound before they have an abortion. Thus, Oklahoman mothers are now deprived of the peace of mind whenever they have a fetal check-up, because they cannot know whether the doctor actually is telling them that everything is fine, or it may be the case that the doctor is actually hiding the fact that the child has a major congenital defect but isn't telling them because that would lead them to having an abortion.

Fact Number 3: A group of ideologues are attempting to hijack textbooks in Texas, proposing major sweeping edits to the point of rewriting history. These edits are aimed to enhance the importance of Jefferson Davis, downplay the importance of the separation of church and state, and reduce the importance of Thomas Jefferson in American political history, as he was rather secular in his beliefs. Texas seems to want to erase history and make it more puritan and conservative, and they are using a very powerful vehicle such as school textbooks to push their agenda, and these will have nationwide effects as the textbooks aren't used in the state alone.

Now why am I disturbed by this?

I am disturbed because I see more and more evidence that this country is slowly becoming a dystopian state, a nation who attempts to control the minds of its citizens, a society who wants to dictate to its subjects one way of thinking, and ostracizes other modes of thought. Individual and personal freedom are slowly ebbing away, be it by means of a police state such as in Arizona, or through intellectual means such as in Oklahoma and Texas. Women's freedom of choice are being taken away in Oklahoma because the doctors aren't bound anymore to tell their patients what really is happening in their bodies, and in Texas, children are being molded into a certain ideology at such a young age, where they are taught a certain way of thinking that would correspond to a way of thinking that is conservative and false, contrary to what really happened in history.

Now what do I think of this? I think that it is extremely disappointing that there are people there who think that they can persuade everyone to believe the way they do. I hate the fact that there are people there who believe that what they think is right and always right, and because of that, everyone else should just follow suit and believe the way they do. This is just another manifestation of proselytism. Whether it is through political ideology such as the racially-motivated Arizona SB 1070, or whether it is through religious ideology such as Oklahoma's HB 2656 or the Texas textbook controversy, this is proselytism at its best. This is an instance of one group of people insisting on another group of people to follow a certain mode of life, with no questions asked. This is rule by authority, which in effect robs the people of their right to think and self-determination.

It is funny and depressing to see the effect of supremacist and religious ideologies to people. People always think that they are better than the next person. They also think that their god is better than the other man's. When in fact, it just boils down to stating that one's delusion is better than the other man's delusion. Religion has its place in society, I acknowledge that. It has therapeutic functions, it solidifies society, it provides hope to people who might be needing it in this world. But for all intents and purposes, it is simply the opiate of the masses, giving people the excuse not to think for themselves, instead they simply follow the dictates of a holy book or two.

And I find it extremely disturbing when people decide to implement this way of thought on other people, as if that is the only correct way of thinking out there.

Oh America, are you still the land of the free, when it seems you're depriving your citizens the freedom to think for themselves? 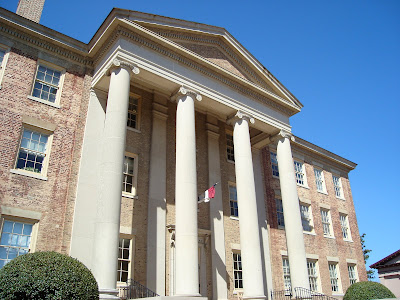 (Pillars Some More, from my University of North Carolina at Chapel Hill Series)