Today is also the National Day of Reason.

Wait? Isn't it supposed to be the National Day of Prayer instead?

Well, yes, according to US Code Section 19 (36 U.S.C. § 119), this is an annual day of observance, designated by the US Congress, where people are asked to turn to God in prayer and meditation.

Wow. People need a law to actually instruct their citizens to pray?

I find this objectionable for two things. First, from the point of view of the clergy, I find it interestingly bizarre and ironic that they needed the secular lawmakers to actually institutionalize prayer. Do they really think that this is necessary? Maybe they think that their followers are becoming more and more disinterested with religion, and so it would be "wise" to institutionalize this act so that everyone would have at least some token religious effort in their lives. But I suppose all I have to say to this is that the Age of Enlightenment already started back in the 18th century. Keep up people.

Second, I find this institutionalism of prayer to be counter to the premise that there should be a separation of church and state. The good thing is that other people agree with me on this one. In fact, last April, 36 U.S.C. § 119 was already being challenged in court to be unconstitutional. And yes, it is being struck down, although there still is room for appeal. Read the details in this report published by the American Humanist Association.

So, what's next? Instead of the National Day of Prayer, I support the National Day of Reason. Here, regardless of religious affiliation, or even the lack of it, everyone can participate. Everyone can support the concept of reason, and the concept that people can be good, even without the belief in god. The thing is, I am not anti-religion at all. I don't care if you pray five times a day facing Mecca, if you offer oranges to a picture of your dead loved one, if you kowtow to an image with the head of an elephant, if you recite a mantra over and over again with the aid of some beads, or even if you believe that a little black book can be your ultimate guide to salvation. I don't care at all, as long as you don't enforce it on anyone else.

There's about 100 billion neurons in the average human brain. It's about time we make use of it. 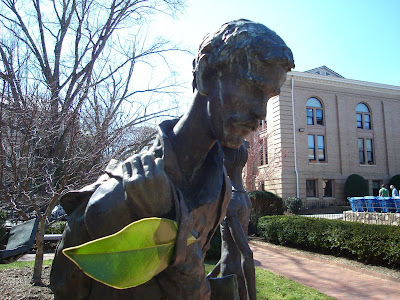 (Statue with Leaf, from my University of North Carolina at Chapel Hill Series)