I have a few friends who have had kids recently. One just had a baby, and another friend of mine just baptized his kid. I guess, it's that time of the year for people of my generation to establish families of their own. All of these information were somehow gleaned indirectly.

That brought me the thought of how absurd the concept of infant baptism is. My friend congratulated his infant, and I have seen other friends do the same as well. But really, how cognizant is the infant, and whatever happened to the infant's right to self-determination?

Well, apparently, that is not considered at all. Infant baptism apparently is this tradition particularly in the Roman Catholic Church that babies should be baptized early on, so that they can be considered a Christian. If not, then they are pagan. And as I have learned later, this being a Christian thing is later confirmed, as if the baptism that was done in infancy was not for real, and people need to be sure of it later.

How silly is that? First, if the baby is a few weeks or even months old, the baby doesn't have the higher-level cognitive ability to decide whether he really wants to be a Christian or not. Heck, object permanence doesn't even get established until the baby is two years old. What does that mean? That means that if the baby sees his mother, the baby knows that the mother is there. However, if you cover the mother with a blanket IN FRONT OF the baby, then the baby will think that the mother is not there anymore. The baby will NOT think that the mother is simply covered by a blanket and is still there. No, babies don't have object permanence yet, until about 2 years of age.

And yet society imposes this stupid tradition of ensuring that the kid is a Christian at such a young age? I am pretty sure that babies don't think that God exists, unless you objectify it and teach your kid that that object is indeed God.

I understand that parents do want the best for their kids, and so they do things like this. However, it is also important to give children the chance to choose what to believe, instead of immediately making the babies "Christian" and then they grow up as robots, unable to think outside of the box, doing things by rote, as if they're the people that Plato has described to be imprisoned in a cave and fearful of looking at the outside. You'd ask them why they do things in a fashion, and all they can give you is that they do things because "it's tradition" and nothing else. 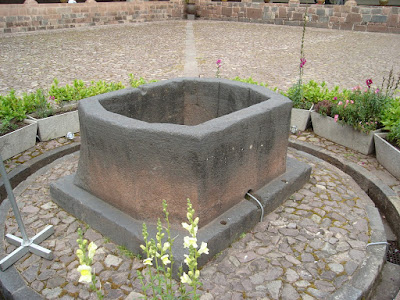 (Inca Well, from my Qorikancha Series)