The other day, I was on my street walking, and I saw a group of youngsters. By youngsters, I mean those group of teenage folk, who obviously look like they're freshmen and are entering the university for the first time. I find it hard to explain, but it is very much obvious, those happy-go-lucky faces, fresh from their hometown, and so eager and excited to try new things and experience stuff away from the watching eyes of their parents.

I mean, just who walks the street with their voices so loud and wearing colorful leis, while clutching a cup, possibly containing some alcoholic drink?

Come to think of it, the incoming freshmen were born in 1992. Yep, the Class of 2014 is a full ten years older than me. That is quite significant. So, what do these people know and not know?

Well, chances are these people are born after the email age. Email has just been the norm for all of them. I on the other hand only created my very first email account in 1998. I was 16 back then, so these freshmen were 6. By the time they are computer literate, email would be very much available to them.

All of them have been born after the Berlin Wall fell. I on the other hand still remember seeing it on the newspaper in 1989. Czechoslovakia has never existed for these people, and so did the Soviet Union.

These people know Nirvana and Kurt Cobain, but only by virtue of the classical oldies station.

Chances are, these people have never used a floppy disk. I on the other hand remember using a 5-1/4 floppy in 1994. Now, there are computers who don't even have a CD drive. Everything is via USB drives nowadays.

If you mention Fergie, they would think of the pop singer, not the duchess. Few of them would know how to write in cursive. I on the other hand remember being drilled over and over on how to connect my letters in school. We had specialized writing pads for these exercises.

Beethoven has always been a dog for them, and Michelangelo was a virus.

Oh well, these are just some signs that I am getting old. Another motivation to graduate and stop being on this side of the podium. Well, given the fact that I am teaching starting next week, it's informative to know these facts, so that I won't feel so detached with these kids. At least I have an idea what's in their heads. Although I have to admit, it's just chicken scratch. 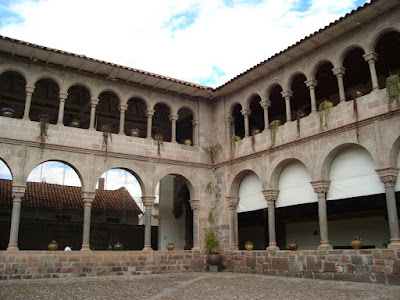 (Inca Courtyard, from my Qorikancha Series)