The other day, we watched a rather very good movie entitled The Lives of Others (German: Das Leben der Anderen). I liked it because even though it was set in the 1980s, it was a movie in which the themes were relatable. It was set in East Berlin, where a prominent playwright was put into surveillance by the East German Stasi. It soon turns out that the real reason for this was that the playwright's girlfriend is also fancied by a high member of the party, and the party member has been using his power to eliminate a rival.

Without revealing too much here, I like the fact that the movie had complex characters, and the allegiances of the characters change which make the movie unpredictable. I actually liked that.

Also, given the fact that self-determination is a big thing for me, I liked the way the movie explored the theme of surveillance. Potential dissidents of the government are watched, allowing the government to control the thoughts of the people. I never would want to live in a society like that. I have a brain, I know how to use it. I don't need a government to watch over me and my every move.

See, the thing is, I don't understand why systems like Communism and other forms of totalitarian control work the way they did. They think they are the best thing in the world, and yet they are so afraid of criticism, that they resort to surveillance and other methods of control. If Communism is the best thing in the world, then why be paranoid? Why not defend how good it is?

I guess the movie also reinforced in me the notion that humans are inherently selfish. Even politicians in the Communist regime want to be better than the rest. They want the girl that someone else has, they want the better pay, they want the information that would allow them to put others down. So Communism is just an illusion. It is just the illusion that everyone will be equal and treated the same. Because really, even Communists are selfish.

I remembered when I was still in undergrad. I had to take a course that was supposed to be about the Philippine national hero. It was required for every undergrad in the Philippines, but when I took it, my professor was an activist, and instead of teaching us about Jose Rizal, he taught us about how Communism was awesome.

Obviously, I didn't buy it. As my final paper, I argued how Communism actually doesn't work, citing examples of Communist breakdown in Romania and in other parts of Eastern Europe.

Seriously, people just need to accept that humans are inherently selfish, and not pretend that it is not the case. I want to be better than my neighbor, and I am not afraid to admit that. 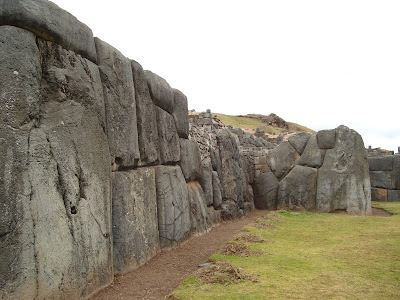 (Giants, from my Saqsayhuaman Series)