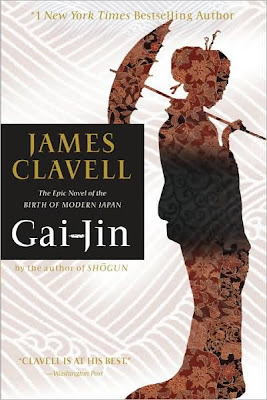 An edited version of this article was first published as Book Review: Gai-Jin by James Clavell on Blogcritics.org.

This is the third book of James Clavell's Asian Saga. Two years ago, I read the first book, Shogun, and a year ago, I read the second, Tai-Pan. Both were huge mammoth books, and the third installment is nothing different.

I suppose there are times in which I sort of disliked this book, but then later I realized that I only "disliked" it because I was expecting something else. But before I get into the critique, let me give you an idea what this book is about first.

This is an epic, a saga, and thus, the plot of the book cannot be easily contained by a few select words. This is a novel about Japan in 1862. And as such, there's plenty of characters, and plenty of plots and sub-plots that intertwine and intermingle.

The main source of conflict is the dealings between the foreigners (gaijin) and the Japanese. The foreigners are represented by the diplomats and the traders. Of the diplomats, there are mainly the representatives of the United Kingdom and France, but the Russia, United States and Switzerland also make minor appearances. With respect to the traders, there are two big trading houses that play big roles, Struan's and Brock's (which were both introduced and were the main source of conflict in the previous book). Lastly, within the foreigners, there's the pivotal role of Angelique Richaud, a Frenchwoman, and Philip Tyrer, a British translator.

In the side of the Japanese, there's actually two big factions here: the Bakufu, which is the legitimate Japanese federal government; and the shishi, which are the rebel samurai whose goal is to bring Japan back to its previous state, when the Emperor had full power.

These so far are the players. Now for the themes. One big theme in this novel is the clash of cultures. Every person, whether it is a foreigner or a Japanese, thinks that one's culture is superior to the other. Everyone has a spirit of egocentrism, always thinking that the other person is rude and barbaric. The foreigners think that the Japanese are barbaric, and vice versa. It's actually a mean and impressive feat that Clavell achieved here, as I find no character I like. Having grown up in several different cultures, I have learned to accept different cultures and be open-minded to others. Thus, this attitude of superiority was actually quite annoying to me as I was reading it. I think that if I find myself hating a character, it's because the author has made it realistic enough to agitate me. And in this book, every character was quite agitating.

Another theme is sex. Believe it or not, sex features a lot in this book. There's the issue of concubines and mistresses, geisha and courtesans. There's also penis envy and kama sutra, but Japanese style. The Japanese are portrayed to be rather conscious of the largeness of the foreign penises, but they save face by assuring themselves that they know more about how to use it, and ridicule the foreigners by saying that they are so ignorant when it comes to sex. Somehow, at one point, I found this talk of sex to be tiring, thinking whether it is really the case that people think about sex all the time. But then I guess that is true, even in this modern age, sometimes even in the most serious affairs, we sometimes step out of our seriousness and mentally undress people in the back of our heads and enjoy a brief erotic moment.

Intrigue is heavy in this book. In fact, this book breathes of intrigue. People whisper information to one another, and people play mind games to the umpteenth degree. I cannot narrate all of the different intriguing details here, and still do justice to the book. You just have to read it for yourself.

I liked the fact that this book is big enough that there's something that anyone will like. There's military action, there's diplomatic espionage, there's even psychological thriller. All in a thousand-page historical novel. Perhaps it is the quintessential saga.

What I didn't like is that there's too many things going on, but then, come to think of it, it's not a run-of-the-mill novel. It is a saga, so there should be too many things going on. I guess I just didn't like the fact that at times, I find myself forgetting about some detail that was written a few hundred pages back, and gets picked up again later. There's just too many people and stories to keep track of.

Overall, it's a saga, and it delivered. This book packs a mean punch. And for fans of historical fiction, this is fiction, but was apparently based on historical events. I may have some complaints, and this book isn't perfect, but it's close. I give it 4.5 out of 5 stars. 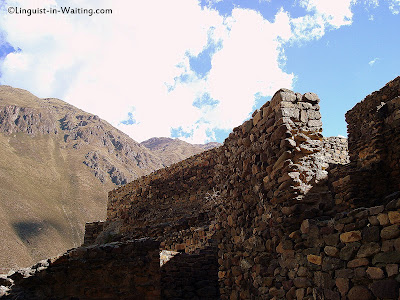 (Mountain Fortress, from my Ollantaytambo Series)