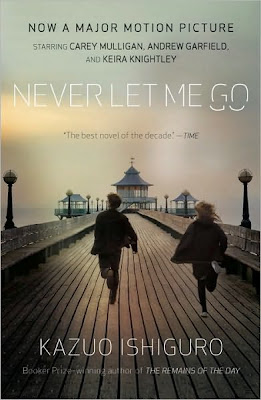 An edited version of this article was first published as Book Review: Never Let Me Go by Kazuo Ishiguro on Blogcritics.org.

This is a novel about Kathy, Ruth, and Tommy. They are three students that reside in Hailsham, a boarding school. Or at least that is what is said in the outset. But soon enough, the reader realizes that this is no ordinary boarding school: teachers are called guardians, and students are encouraged to produce poetry and art but nothing else. There's an interesting method of economics in the school, where they get to buy other people's artwork using tokens. There is also a character only known as Madame, and she collects the most beautiful pieces that are produced by the students and hoards them off to a secret gallery.

Later on, other crucial facts are slowly revealed to the reader. Slowly, the reader learns that the students are there for a purpose, a purpose that perhaps is advantageous for the greater society, but definitely not for the students themselves. This slow-moving revelation is the crux of the novel, something that I am highly tempted to reveal here, but opt not to. I'd leave that to the reader to discover.

But no, the focus of the novel is actually not on this dystopian and dysfunctional fact. Instead, the focus rests on the social dynamic between Kathy, Ruth, and Tommy. Early on, Kathy is one timid girl, who seems to be more of a follower than a doer. She is content with observing her surroundings instead of doing things. Ruth is one feisty girl she befriends, and Tommy is a boy with a temper, but things lead to Kathy and Tommy being close to each other.

Upon hitting puberty, Ruth and Tommy decide that they like each other, and so they become a couple and have plenty of sex. However, it is obvious to the reader that old pals Kathy and Tommy are better suited for each other. Ruth is the anti-heroine; I just couldn't make up my mind whether I liked her or not. She does things that preclude me from totally thinking that he is the antagonist. After all, it is the society as a whole which is the antagonist in this novel; Kathy, Ruth, and Tommy only have different ways of dealing with the obstacles that are presented in front of them.

As Never Let Me Go progresses, the characters leave the scene one by one. Ruth becomes the first one to go . As she lay dying, she convinces Kathy and Tommy to be a couple, after all, they are compatible with each other. She admits that it was her life-long goal to antagonize the two apart, her reason being that otherwise, she would feel quite lonely. She reveals information that would potentially give them reprieve from the ultimate end that they all are facing. To make a long story short, this is a story about the social and emotional dynamics between three people, between a love triangle, as they navigate their short life here on earth, knowing that sometime in the future, there will be an end.

With respect to the novel, I am actually glad that I picked up this book. I don't think I can say anything negative about it. I loved the way that it was written: the narration was subtle, and it felt like it was a narration that slowly embraced my whole being as I read the book. I remember feeling the same way when I read my very first Ishiguro, when I picked up Nocturnes. It was just a style of narration that was addictive and intoxicating.

With respect to the structure, I appreciated this style where things were slowly revealed to the reader, and the reader's task was to piece things together and string the clues together so that they would make sense as a whole. As much as the topic sounds like science fiction, where the characters exist in a dystopian alternate universe, it wasn't presented as science fiction. Instead, this felt more like a psychological thriller, in which the conflict rested completely within the minds of the three main characters. I guess this is one exception to the stereotype that sees science fiction as all about gadgets and other hype, and lacking soul and emotional impact.

Overall, I loved this book. This is one book that will linger in my head for the days to come. I enthusiastically give it 5 out of 5 stars. 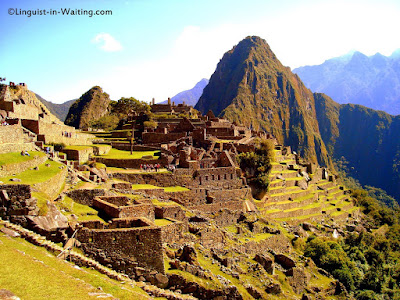 (The Overview, from my Machu Picchu Series)