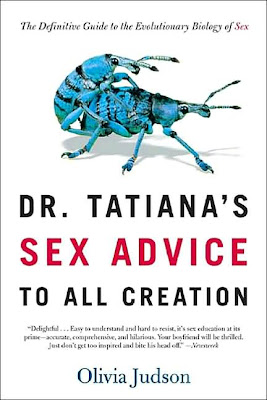 An edited version of this article was first published as Book Review: Dr. Tatiana's Sex Advice to All Creation by Olivia Judson on Blogcritics.org.

It is a rare event that I pick up a non-fiction book and actually enjoy reading it. Based on my track record, non-fiction usually results in disappointment: my previous experiences were mostly based on reading memoirs where I just didn't sympathize with the authors. It thus failed to provide a temporary escape from reality, which I should say, is one of the major reasons why I read.

But, this current one is an exception. It is rare in many different ways, one of them being the fact that I had to go to my university's Science and Engineering Library to borrow this one, which is a location that I rarely go to borrow books to read for fun. Another quirk is that this book isn't your regular non-fiction read: it's not a diary, not a memoir, nothing like that. Instead, this is actually a science book. But it's not your regular science book; it's a science book about sex, written in the format of an advice column.

Yes folks, you've read that correctly. It is written as an advice column, like your Dear Abby snippet in the newspaper. And yes, the topic is about sex. But not just sex, I mean SEX. Sex, from banana slugs to spotted hyenas, all explained from an evolutionary perspective. And that, is perhaps one of the most captivating aspects of this book, in my opinion.

This book is actually arranged in themes: from the basic, to violence in sex, to monogamy and infidelity, to homosexuality. And yes, it covers a wide variety of species, all of them writing their letters soliciting advice from the fictional Dr. Tatiana. And Dr. Tatiana answers all these sex questions in a wonderful and evolutionary manner. It definitely puts humans and human sexual behavior into perspective.

See, I was definitely impressed with the evolutionary perspective that this book has taken. Sexual behavior in many different species were explained, even radical ones, like for example the annoying habit of female praying mantis to bite off the head of the male during sex. I've learned that doing so makes the males go into a violent spasm that allows the sperm to fertilize the eggs better. Thus, it is death for procreation, something that in evolutionary terms, makes perfect sense.

The aspect of this book that I am amazed about the most is actually not derived from the contents of the book per se, but from the implications that this book has, with respect to current human thinking. Humans tend to think that monogamy should be the norm, that homosexuality should be outlawed, and that rape should be a crime. But by looking at the various species that are present in this planet, we can see several examples in which sex is promiscuous, that males have sex with fellow males, and that sex is a brutal and forced affair. Without condoning rape (I am still a firm believer of free will), I think that this suggests that humans and their idealized view of sex is more of a deviance than is the norm, if one considers the whole spectrum of species that are present in the world.

So, have I enjoyed this book? Definitely. I recommend this to anyone who would love to learn something new. I am not an evolutionary biologist, but this book was so accessible that after reading this, I have the feeling that I have a set of new facts sitting in the back of my head, and somehow, I am glad that I have learned them. I give this book 4 out of 5 stars. 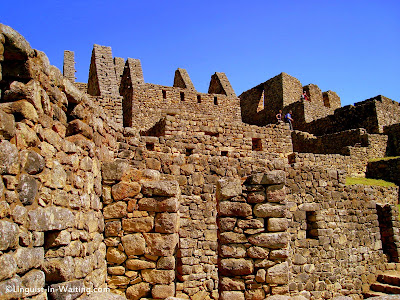 (The Lost City, from my Machu Picchu Series)