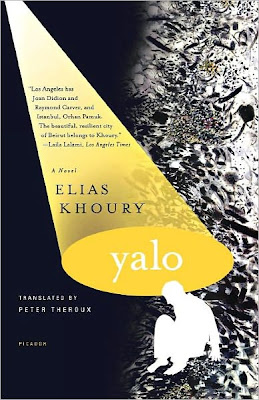 An edited version of this article was first published as Book Review: Yalo by Elias Khoury on Blogcritics.org.

A serial rapist meets a torturing interrogator in wartime Lebanon. Yet he soon realizes that the ultimate source of pain is his own head, which can cause a much greater suffering than the devices that his prisoners used to inflict pain on him. This is a novel that is heavy on passion, blood, and violence. Definitely not for the squeamish reader.

At the outset, we are introduced to Daniel, but more fondly known as Yalo. We soon learn that he is a prisoner, he was arrested not so long ago, and he is being held in a cell somewhere in Lebanon. The interrogators are trying to fish out a confession from him, and since he wouldn't cough up, they resort to torture. Torture in this case involves feral cats, chairs, bottles shoved in one's rectum, and even psychological torture, as reflected in the episodes when Yalo is made to write his life story, as his "survival" depends on it. Without revealing how this book ends, I should say that this is a tragedy.

So, why would one want to read this novel? Well, I think the experience of reading this novel should be less about wanting to know what happens in the end (I already told you above, this is a tragedy), but more about what happens as we head to the end. The journey of reading this book is an end in itself. How?

First, this novel provides a great way to know how the mind deals with pain. There is a great difference between the mental state of Yalo when we first met him at the outset, and at the dual-bipolar Yalo that we encounter at the end of the novel. This difference is reflected in the way the narrative is structured: at the outset, an unknown third-person is narrating Yalo's story. But near the end, Daniel becomes Yalo's alter ego and narrates the story as if he is looking at Yalo (himself) from the outside. In other words, Yalo to some degree, has an out-of-body experience.

Additionally, this novel also gives a great description on the psychology of torture. The story happens within a short period of time: Yalo isn't incarcerated in that Lebanese prison for years. However, due to the things that were done to him (which I won't elaborate), the notion of time for Yalo is blurred, making what for us is an hour seem like an eternity. This novel does a good job in providing a window to the mind of the tormented, and leaves the reader deep in thought, wondering why some humans can be capable of doing these horrendous things to other humans.

A third reason why I think this was a good book was its way of handling the truth. Yalo is an unreliable narrator, or at least, the interrogators would like him (and by extension, the reader) to think. Yalo is given the task of writing his life story, which will be in essence a written confession with respect to the crimes that the interrogators want to charge him with. The interrogators tell him that "they know everything". Yes, there is a contradiction: if they know everything, then why would they want Yalo to still write it for them? However, Yalo writes his story, in fear of further torture, and every time, the interrogators tell him to rewrite it, as he "left some details". So Yalo resorts to imagination and invention. This plot device makes it really hard for the reader to determine which is real and which is fictional. To some degree, I believe that this is one way of saying that there are things in which we really cannot know what the truth is. Truth is relative, and somehow, people have the ability to make things true, at least in their heads, if they really want it to.

One final word, regarding this novel's scope. This novel isn't your broad-and-shallow type of novel: the story isn't developed by the addition of new events as time moves forward. Instead, this novel is narrow-yet-dense. As I mentioned earlier, time doesn't move forward too much here. Instead, the past is constantly dug up, memories are retrieved, confessions are elicited, and we get to know what happened sometime in the past with respect to a character page after page of this amazing narrative.

By the comments that I have given above, it is obvious that I liked this book. I cannot think of a negative aspect about this book, with the sole exception that the topic isn't really my main interest. As much as I liked the way the novel is structured, and as much as I like the way the narrative was set up, the topic just didn't pique my interest as much as I wanted it to. Hence I am giving it 4 out of 5 stars. That being said, I am open to the idea of reading more books by Elias Khoury and by Middle Eastern writers in general. 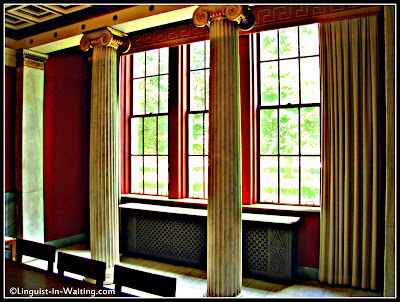 (The Greek Window, from my Cathedral of Learning Series)