You know, I remember the times when I was growing up and my parents made me do household chores. I remember hating that. But now, come to think of it, I am glad that my parents had the stubbornness to force me to do those things, because in the long run, it was quite beneficial.

So, I don't have much luck when it comes to roommates. Most of the time, they are the world's dirtiest slobs. Okay, that might be an exaggeration, but seriously, compared to my standards, their standards are low. Which is why I am glad that one of my roommates left recently. Because seriously, this dude didn't know how to clean after himself. You know, one would think that after eating a meal, one would wash the dishes? But no, he'd just leave it at the kitchen sink. And here I am, eating afterward, and I'd just wash after him, because I'd rather have the kitchen clean than stinking, just because I only opted to wash the dishes that I used.

I know what you're thinking. You probably are thinking that I should say something to this person and remind him of his chores. But seriously, we did that. In fact, my other roommate also did that. But that didn't work. He'd still leave this stuff all over the place. So I got sick of reminding him. After all, I am not here as his parent. His parents should have trained him for that. But no, apparently not.

So, what do I do? Well, easy. If he doesn't want to clean after himself, then he should pay for it. So, for the utilities, when I give him a bill every month, he gets a bill that is higher than mine. After all, I was the one who was buying the dish detergent, I was the one who was cleaning after him, I was the one who was doing everything. So I think it was just fair to be paid for it. That way, I don't mind doing the work, and I don't feel like a parent, and I get a relatively clean house to enjoy.

So, this made me think. I remember this one saying about parents and how their kids can be an embarrassment to them, when they grow up. Well, this is so true. How parents raise their kids reflects on them. The fact that my outgoing roommate had this behavior makes me think that his parents didn't do a good job in raising him with respect to domestic chores. To some degree, that is a sign of a failure. That being said, I know that there's also the personal aspect. Sometimes, no matter how hard you train the children, the children can be stubborn, and so it is not completely the parents' fault.

Oh well, perhaps it is evident how much I want a lifestyle upgrade, so that I can get a place of my own. 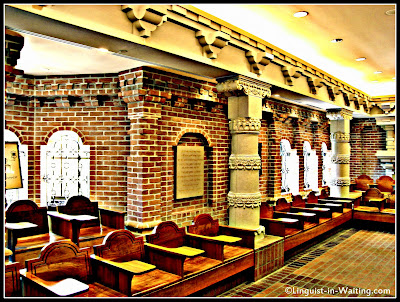 (More Seats, from my Cathedral of Learning Series)