It is slowly getting colder here in Berlin. Or rather, it immediately became colder. Back in October even.

There was one week in October, the third week I think, when the weather was actually warm. Warmer than usual, that I wore my coat just out of habit, but I found myself actually taking them off more times than usual.

Now the week after that, it began with two days of gloom. No sun, all clouds, and the temperatures were single digits Centigrade. And it hasn't stopped being like that since. It's cold, gloomy, and chilly. Although I am guessing the snow won't be as bad as in Buffalo.

This reminds me, I actually haven't experienced a winter last year. Well, in Buffalo, the winter was so warm, that it didn't really snow at all. I never shoveled my driveway last winter. And it was ironic that the only time I experienced winter last year was when I was in Europe. I flew for a conference to Tübingen last February. That was during the cold wave in Europe. I flew to Stuttgart Airport, and when I got out, oh my gosh, breathing was hard. One breathes, and the inside of one's nostrils just freezes.

So, I don't know. I am somehow excited by the upcoming winter. I get to wear my winter coat again, and use my awesome Guatemala scarf, and wear my gloves. Hopefully, there isn't a snowstorm or anything. 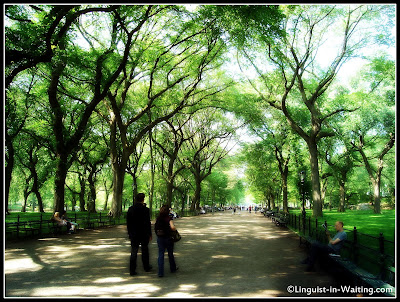 (Promenade, from my Central Park Series)