The Arrogance of Education

Many recent events have made me think about the relationship between religion, education, and society as a whole. First, there was the debate about the Reproductive Health Bill that finally moved forward in the Philippines. Both the House and the Senate finally passed it, and so the Philippines became a little bit more secular. Needless to say, I am happy about it.

What I find disturbing is the fact that the Catholic Church is still making a ruckus about it; it was reported that they would even try to file a case to the Supreme Court, as they claim that this RH Bill infringes on their religious freedom.

Now what kind of logic is that? How does free access to contraceptives and sexual education in schools an infrigement of one's religious beliefs? If one's religion dictates that they cannot use any artificial means of birth control during sex, then they can simple opt NOT to avail of these free provisos. There is no need for them to try to dictate what they believe to other people's throats.

See, I think it is these religious cronies that are infringing on other people's religious freedom. They want to dictate to the whole country what they believe in, and it happens that they do not believe that using artificial methods of birth control is moral. That, in my opinion, is the act that infringes on religious freedom. I think that religious freedom means exactly that, that every person has the freedom to exercise whatever religion he or she wants to believe in, including the option not to believe in any religion. Hence, the choice to use artificial birth control is dependent on the individual, and mandating that there should be free access to those methods does not that mean everyone is now required to access these equipment and use them.

The Catholic Church is definitely lacking in good logic here.

The way I see it, the Catholic Church seems to act in a way that suggests that they assume that their flock cannot think for themselves, hence, it is the bishops that think for the flock. Isn't that what every religion is about, anyway? I used to belong in one religion, and the pattern is the same. We were encouraged not to think for ourselves (even though the concept of free will is in theory, present), but instead, we were encouraged to see what the Bible says. But of course, the Bible says only the things that are interpreted by the people who are in the higher-ranking positions.

I was told that because I decided to get myself some higher education, I became an arrogant person on the path to moral disaster. That sounds horrible, but that isn't any different from the comments I have seen from the people who were against the RH Bill, saying that the Senators who voted Yes to it will enjoy God's wrath in Hell. Anyway, my point is, education seems to be the way to exit the moral bandwagon. It seems that once a person gets some higher education, then one becomes amoral, or worse, immoral.

This hypothesis is supported by a recent study, found here. Education does seem to be the reason why some people tend to be less religious. The more you know, the less you believe. Now is that a bad thing? I don't think so.

See, the reason why the Catholic Church has a firm grasp in the Philippines is because many people are uneducated. Many people do not know better, and so the way they gather knowledge is through figures of authority. The pulpit happens to be doing a good job in this respect. The priest is a figure of authority, and so everything that the priest says must be true.

However, once someone gets educated, then this behavior is now a fallacy. Just because someone said it ex cathedra doesn't mean it is true. The scientific method now replaces this paradigm. There is hypothesis formation, there is experimentation, and there is evaluation whether the hypothesis stands or not. That is what education does to you.

Now is that arrogance? I don't think so. I don't see the fact that I can think for myself arrogance. I am simply using my brain, something that I have been equipped with, for me to use.

Speaking of arrogance, it is actually the religious factions who I think are arrogant, as they presume that their flock has no ability to think for themselves, and instead they go ahead and do the thinking for their flock, presuming that everyone won't want free access to birth control, and that everyone won't want to have sex education at school. That I think is arrogance, together with the moanings and complaints of the religious right when they say that science has cognitive privilege, when in fact, science has cognitive respect, not because society is biased, but because science earned it. Society respects science over religion simply because science works. And no, this is not an instance of science infringing over a person's religious freedom.

So, is this arrogance? Or is this simply my attempt at rejecting dogma?

I am glad that I opted to get some education, and I am grateful for every bit of help that I have received to get where I am. However, it is a sad reality that there was once a time in which some people thought it would be to my best interests that I simply become a tuktuk driver so that I could focus my energies into evangelizing, going my way to try to convert as many people as I can to believe a particular flavor of religion. 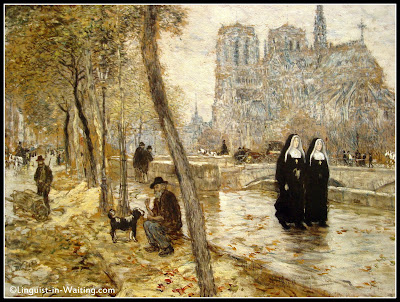 (Nuns, from my Art Institute of Chicago Series)