Book Review: The Histories by Herodotus 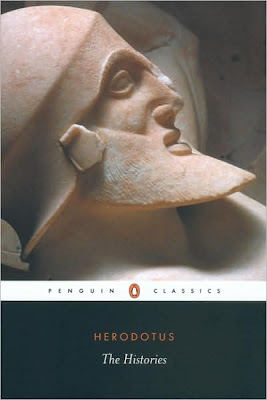 It took me a while to finish reading this book. I started it about 4 weeks ago, and only now have I finally finished it. It was massive, different, and at times tiring, but I am glad that I finally got out of it, and could finally say that I have read a Classical work, as these don't happen often. To tell you the truth, in fact, the only reason I have a copy of this book is because a good friend from graduate school gave this to me as a graduation present.

Anyway, The Histories is not a novel. It is instead a historical narrative of the events surrounding the Greco-Persian Wars in the 5 Century BC. Four Persian kings were involved, Cyrus, Cambyses, Darius, and Xerxes. The overall arching theme was the enmity between the various Greek city-states who unite in order to face the large Persian empire. One can draw parallels to the theme of freedom or slavery.

As I am not used to reading historical narratives, I am not sure whether this is well-written or not in that aspect. Sometimes, I felt like there was no structure to it; the topics just come and go, and the narratives seem like it was structured the way his mind went, with plenty of digressions and side-points. This was mostly true in the first half of the book. The latter half dealt with one big theme, that is, Xerxes' campaign to attack Greece.

Speaking of digressions, there were plenty of them, and as I was reading them, it occurred to me that I heard of these digressions before, I just didn't know that Herodotus wrote them. I read about the language experiment that "proved" that Phrygian was the most ancient language, as the children who weren't exposed to any linguistic input spoke Phrygian words as their first language (yes, the experiment has confounds). I also read about the Amazon female warriors who cut off one of their breasts so that they can use a bow and arrow better. I also read about the ancient geographical surveys that basically reported the breadth of the known inhabited world at the time.

As much as this is a historical account, there are also fanciful tales such as dog-headed men and gold-digging ants. Herodotus says that these were just reported to him. It makes an interesting thought about the ontology of the days. Herodotus seem to think that these characters are true enough to report, hence he wrote them down. However, as we know, there aren't any dog-headed men, so truth has changed over time. It reminds me of the tales that are recorded in the Bible, where you have talking snakes, talking burning bushes, among others. I believe they are no different than Herodotus' fantastic tales. It is an interesting piece of culture and mythology, but they are nothing more than that. The Bible has prophets, the Histories has oracles.

Overall, I am glad I had a chance to read this book. It was a different reading experience, and while I slightly miss the enjoyment I get when reading novels, I did come out of this one greatly educated and informed about the Classical World. 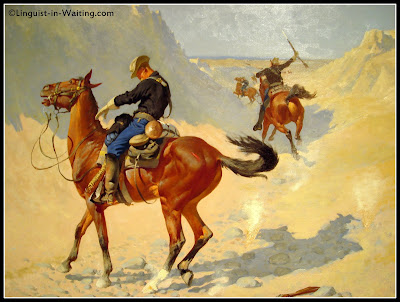 (Horsemen, from my Art Institute of Chicago Series)