I am starting a new travelogue mini-series. This is because for 7 days around Easter, a friend and I took a little trip to Luxembourg and Belgium. We visited 3 cities, and increased our country count. Thus, this brings my country count to 28.

As there are plenty of things I would like to show, first, I am providing a summary post here. Details, as well as pictures, will follow later. For the moment, I am giving an itinerary.

March 21: This trip started when I flew from Berlin to Luxembourg via Saarbrücken; I had a flight booked on Luxair, and the Saarbrücken-Luxembourg leg was perhaps the shortest flight I have taken, with a flight time of 15 minutes. Since my flight was in the evening, I was able to work in the day, and then after work, I headed to the airport and flew to Luxembourg. I met my friend at the hotel there.

March 22 was a Friday, and we spent this day walking all over Luxembourg City: places we saw were the Roman fortress, several churches, the State Museum, among other things. We had a very favorable feel of the place, and liked the city and country as a whole.

March 23 was the day when we were to travel to Ghent, in Belgium. We checked out of the hotel after breakfast, and mailed postcards at the post office, which was open on Saturdays. We didn't have time to catch the 9:20 train to Brussels (to catch another train to Ghent), since we didn't have tickets yet. We bought tickets, and was supposed to catch the 10:20 train (trains to Brussels run hourly), but that was canceled. 11:20 was there, but there were weather problems in Belgium, so instead of taking it all the way to Brussels, we arrived in Arlon, waited for about an hour, then the train moved until Marloie. Then they put us on a bus to Namur, from which we caught another train to Brussels. Then, we took our last train to Ghent. If everything went smoothly, the trip should just have been 3 and a half hours. But it ended up taking the whole day. We arrived in Ghent at 6:30 PM. We were tired, so we just ate at a good brasserie.

March 24 was snowy, in Ghent. We checked out several places, including Gravensteen, a castle in the middle of the city. Plus, we ate waffles, chocolate, had beer, and walked all over town.

March 25 was a travel day again, but fortunately, it was non-eventful. We checked out of our Ghent hotel, took the streetcar back to the train station, and rode a train to Brussels. By 10:00 AM, we found our bed and breakfast, dropped our luggage, and explored the city. We followed several walking trails about comics, as Belgians are known for these things. We also saw a pissing toddler statue.

March 26: we decided to head across the city using our daypass, and went to Tervuren, which is the location of the Royal Africa Museum. After that, we checked out the Atomium, and went hunting for chocolate.

March 27 was the day we would fly out, but since our flights were in the evening, we still had some time to check out the city in the morning. After a nice breakfast, we checked out, and then headed to the Rene Magritte Museum. I am a big fan of surrealism when it comes to art, so this was a treat for me. After lunch, we picked up our bags, and headed to the airport. It was time to catch my flight to Berlin.

So there, this was a summary of my latest trip. It wasn't a long trip, unlike Guatemala, but I enjoyed it nonetheless (well, except for the part when we were traveling through Wallonia). I added two new countries to my country count, and I have tasted some very exquisite chocolate and flavorful beer. The next several blog posts will provide pictures and details of the individual legs of this trip. 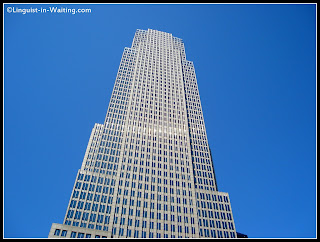 (Skyscraper, from my Downtown Cleveland Series)