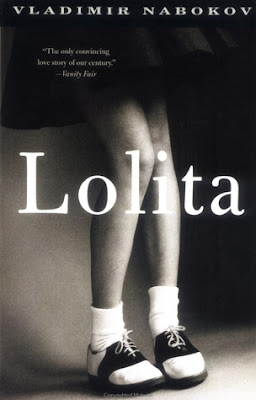 Oh Lolita, I finally got to reading this book. As this was one of the more controversial and classic works of literature in the latter half of the 20th century, I figured I should read this one day, so I bought the book and finally, I started to read it. Let me give you a short synopsis, although I think you don't need it at all. Pop culture after all has given us enough knowledge to know what this book is about.

This book narrates the story of Humbert Humbert (the book is actually narrated by himself), a European gentleman, who happens to like small girls. Yes, he likes them, sexually. In short, he is what is known as a pedophile. He visits the United States, and takes up lodging in the house of Charlotte Haze, who happens to have a 12-year-old daughter, Dolores. Needless to say, he gets smitten by Dolores. Lolita is his pet name for this girl. Dolores and Humbert carry on a sexual relationship, and somehow Charlotte marries Humbert, who continues on carrying a sexual relationship with his stepdaughter. Charlotte somehow dies in a traffic accident after reading Humbert's diary and knowing about the relationship between him and her daughter. Then Humbert and Lolita go on a long road trip across the USA, staying in one hotel after another.

A few years pass, Lolita somehow escapes from Humbert. Later on, they get reunited briefly, and Lolita is now married and pregnant, carrying her husband's child. Humbert tries to convince Lolita to leave her husband and come back to him, but that fails. Later on, Humbert kills Lolita's accomplice in her escape, and then later on gets arrested for reckless driving. Based on how the novel ends, it is clear that Humbert is in prison, but one is not sure whether he is in prison because of pedophilia, or because he killed Lolita's accomplice.

Now, personally, I exit this book not knowing whether I liked it or not. I am leaning towards not liking it, but let me explain. I have read several novels before which featured an anti-hero. In Lolita, Nabokov paints the picture of a pedophile, someone who had carried a sexual relationship with a 12-year-old girl. Given this characteristic, it is very hard to sympathize and identify with the protagonist. I personally found it very hard to "cheer" the protagonist to go on and narrate the rest of the story. Somehow, the concept of incest and pedophilia just doesn't sit well with me.

I cannot help but compare Humbert Humbert to Patrick Bateman, the anti-hero of Bret Easton Ellis' American Psycho. American Psycho happens to be one of my favorite books, which features a protagonist that goes on a killing spree (or did he?). The beauty about Patrick Bateman is that he carried these murders pretty much in a numbing fashion. He never felt remorse for his actions. He just killed and killed, one victim after another. Now it is true that the book was vague with respect to whether these killings actually happened, or whether these are all episodes of imagination happening in Patrick Bateman's mind. We cannot tell, which again, adds another layer of awesomeness to this novel.

In contrast to that, the events in Lolita were crafted by Nabokov to be interpreted as a set of events that actually happened. Some European man with the name Humbert Humbert actually went ahead and carried a sexual relationship with a 12-year-old. Somehow, that doesn't sit well with me. Where do I begin explaining why?

Let's start with the fact that the girl is underage. I firmly believe in self-determination, so I wonder, at 12 years of age, does one already know the full extent of one's actions? Sure, Dolores seduced Humbert at one point, but Humbert should have known better, he is the adult. There is a reason why several countries' legal age when it comes to sexual intercourse is at least 16. But then again, Humbert is a pedophile, so I cannot expect him to refuse.

Speaking of pedophilia, one might say that Humbert Humbert is mentally ill, and that his behavior is due to some sort of mental deviance. I cannot stomach his methods of rationalization; Nabokov writes this novel in a way that the main character makes plenty of rational appeals to the reader, begging the reader to withhold judgment and see his perspective with respect to why he is sleeping with Lolita. Sure, rationalization is good, but there is a reason why plenty of countries have a democratic model. Society, after all, is the result of the push and pull between individual and social forces. We might all have selfish desires, but at the same time, in order to survive, we might have to suppress some of our selfish desires and act in accordance with what the group wants. And as far as I know, most societies condemn pedophilia. Hence, Humbert's attempts on rationalizing his actions just strike me as pathetic.

So there, I said it. Humbert Humbert is one pathetic literary character.

That being said, I do not think I hate the book. I just hate the main character. I think I'd like to praise Nabokov for writing about a topic that is controversial. I do think that some of us have desires similar to Humbert Humbert; the difference is that most people do not act on these desires. The ego, after all, suppresses the id. When this doesn't happen, then a crime ensues.

As a final word, I think I prefer reading about incest and pedophilia, than actually witnessing one. Fiction, after all, can be a healthy escape from reality. I'd rather be disgusted about a fictional person than someone who actually committed this crime in real life.

I am giving this book 3 out of 5 stars. I do not wholeheartedly recommend it; read it primarily for its cultural significance.