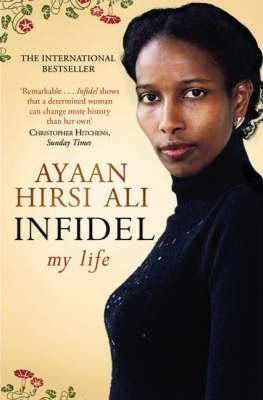 If you have a brain, will you opt to use it?

I am so glad that I opted to read this book. This is the autobiography of feminist and atheist activist Ayaan Hirsi Ali, originally from Somalia, and is now a Dutch (and recently, a naturalized American) citizen. It chronicles her life, from the time they were living in Somalia, and then Saudi Arabia, and then Kenya. It chronicles how she was able to escape an arranged marriage, how she was able to get asylum in the Netherlands, and how she became a member of the Dutch Parliament. It also narrates how her life later became threatened by Muslim fundamentalists due to the criticisms that she has expressed against Islam.

Anyway, reading this book makes me reinforce my own personal beliefs. I am not going to say anything else about the synopsis; I don't want to write a review that simply repeats what the book's message is. Rather, I would like to write a review showing how this book has affected me. And it definitely did, in many ways.

First, I would like to say that I am not an authority on Islam. I do not have an Islamic background, and therefore I have no right to say whether Hirsi Ali has properly criticized Islam or not. Between the two of us, she has more knowledge about this religion than I, so I can simply take her word for it. That being said, I think that the principles that she is bringing to the table is true not only to Islam, but to religion as a whole. Hence, she might be a critic of Islam, but in my opinion, her criticisms actually apply to everyone who happens to be religious.

See, the most important criticism I think she is raising is the fact that Islam prevents people from exercising critical thinking. Islam puts people into a mental cage, barring them from thinking for themselves. Instead, people are forced to use the Quran to see whether their actions are good or bad. The thing is, this is true not within Islam, but of other religions as well.

I was raised as a Jehovah's Witness. For 25 years, practically from the time I was born, until when I decided to leave at the age of 25, I was identifying as one of them. I remember the culture I was brought up; it pales in comparison to the mental torture that Hirsi Ali has experienced, but regardless, it was a culture where one is not encouraged to think for oneself. Can we smoke? Check the Bible. Can we have sex before marriage? Check the Bible. Can we use the Internet? Check the Bible. It was always the case that one assumes that humans cannot think for themselves, and therefore one has to consult the Bible, or rather, the interpretation of the Bible, as interpreted by a small group of men residing in Brooklyn, which happens to be where the headquarters of the Jehovah's Witnesses are located. Needless to say, these interpretations are infallible.

The Witnesses do not believe in Heaven or Hell. They believe in Paradise on Earth. Still, this belief still takes the current life to be some sort of waiting period for the Afterlife; it doesn't matter that the Afterlife is a Paradise and not Hell or Heaven. Witnesses do not believe that people are eternally punished, but they do believe that God will punish and kill them if they do not do good. Even though they do believe in "free will". I found striking parallels to the Islamic way of thinking with the way of thinking I was used to for 25 years. When Muslims suffer, they think that Allah is giving them a test. And because of that, they tend to be fatalistic and just accept the fact that their child died, or that they were poor, and so on. The Witnesses are the same. They always think that Satan is testing them. It's always some sort of supernatural external force, which they blame for their problems. Somehow, religion is good at providing this sort of excuse.

Anyway, reading this book has just strengthened my beliefs about religion. I identify as an atheist, and this book has just provided me with further data points why I think the way I think. Humans have a brain; I dissected once, back in 2008. It was the trigger that eventually allowed me to get out of my very own religious mental cage, and allowed me to think for myself. There were times when I did things that were not allowed by the Witnesses, and I seriously thought that by being blasphemous, some sort of lightning would strike me. Even little things like uttering "Fuck Jehovah" scared me before. I later realized how much of a mental restraint religion has become to me. Hence, when I finally left the church in 2008, it was such a relief to be able to finally use my brain to the fullest. It has been my best decision of my life, to tell you the truth.

When I read about Hirsi Ali's life experiences, I sometimes find parallels to my own life. Her relationship with her parents haven't been the most ideal. Her father arranged a marriage for her to someone who was just distantly related, and someone she never liked in the first place. I personally wasn't subjected to an arranged marriage, but there were times when my parents wanted to mold my life into something that I really did not want.

When I was little, my parents thought that Armageddon was near. Armageddon was the event when believers will remain here on earth, while non-believers would be destroyed. I was heavily discouraged from making friends in school who were outside the church, because after all, they would be dead in Armageddon. Anyway, they thought that Armageddon was very near and there would be no time for us kids to grow up. They thought that the perfect solution would be that I would just be a tricycle (tuktuk) driver so that I can drive people in the morning and preach in the afternoon. Yes, my parents wanted me to be a tuktuk driver, and my sister to be a dressmaker, so that we can spend the most of our times preaching and "seeking the kingdom first".

I hated that phrase: to "seek the kingdom first". Right now, it sounds so similar to the attitudes of those Muslim fundamentalists who fly planes into skyscrapers. I also hated the fact that to some degree, my parents decided for themselves that they know what we want. Granted, my experiences are minor in comparison to Hirsi Ali's, and eventually, I was able to change my future. I was able to get a PhD and become a scientist. I cannot imagine what my life would be if I just ended up as a tuktuk driver, ferrying people around the neighborhood for hours, earning just a meagre salary, just in order to be able to seek the kingdom first.

I don't remember the last time my father and I talked. A year ago, a friend (who works in the same government agency as my dad does) told me that he met my dad, and out of the blue, my dad told my friend that I am on the "moral path to destruction". I cannot shake off the idea that my dad (and other people who are devout and religious) is acting like he is on some moral pedestal, knowing what is morally correct and incorrect, claiming that there is no such thing as a morality without God.

See, that is the problem with religion. Religion molds people into thinking that they (the believers) are superior than those who do not believe. Christianity believed that, and even allowed them to kill non-believers, back in the days when the Inquisition and the Crusades were in high fashion. Now it is happening to Islam. As much as I am a supporter for cultural relativism, for me, relativism stops when one culture decides that they can decide whether the other culture can live or die. And if one such culture fosters these types of thinking, then I think it is in everyone's interests for this culture to be eradicated.

Reading Hirsi Ali's biography made me evaluate what my political views are. I am in favor of a welfare state, as well as a multi-cultural state, but there are limits to how much we can tolerate differences. Everyone should not be hindered in their pursuit of life, liberty, and happiness. Religion is tolerated, to the extent that believers can see that things are relative, and that their beliefs are not superior over others. More importantly, believers should not think that believing in one such religion allows them to kill other people. If I had the choice, I would opt for the concept of religion to be eradicated from this planet. Alas, I am not endowed with powers to actually execute that.

I don't have the drive Hirsi Ali has. I am not driven enough to pursue such a controversial cause. Hence, I can only stand back and show support through other means. When I was in the United States, I was a card-carrying member of the ACLU, as they had a good track record of arguing for and lobbying for issues that I cared a lot about.

I am glad that I have picked up this book. If you are someone who is afraid of reading something that might force you to use your brain, then do not read this book, by any means. After all, your religion might even brand this book as apostate literature. Otherwise, do pick up this book. It is very powerful, and perhaps might even change your life. I have my beliefs because I personally evaluated what issues matter to me, and how I stand on these issues. Most people cannot be bothered to evaluate their own beliefs, and instead just buy into a blanket set of beliefs under the guise of religion. You have a brain. Learn how to use it. I am an atheist, and I know why. Don't say you are religious, just because that's the tradition you grew up in.

Together with Richard Dawkins, I can say that Ayaan Hirsi Ali has also been influential in shaping my world view. I give this 7 out of 5 stars. This is perhaps the best book I have read this year, and I totally recommend it.