Book Review: Love in the Time of Cholera by Gabriel García Márquez 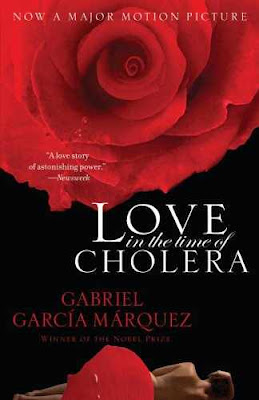 I can't believe I only picked up this book to read just now. I love Latin American literature, and magical realism has always been a fascinating genre for me, and yet I only had the chance to read this book a few days ago. I have watched the movie within the last 5 years and I remember loving what I saw, but after reading this book, I am glad to have done so because the book just provides a richer description and narrative of the love of Florentino Ariza toward Fermina Daza.

As a short synopsis, this book narrates the tale of Florentino Ariza, a young man residing in an unnamed city in Colombia (but most likely Cartagena). During his twenties, he declares his love for Fermina Daza. At first, they start courting, but somehow, Fermina rejects him and instead goes ahead and marries Dr. Juvenal Urbino. She marries him not because she loves him, but he is the more stable person. Because of this decision, Florentino is heart-broken, but still declares his undying love for Fermina. He therefore waits 50 years for Fermina to be available. And half a century later, when Dr. Urbino finally dies because of breaking his spine while trying to catch a parrot perched high on a mango tree, Florentino goes back and tries to woo Fermina again, at the very ripe age of 70.

The book chronicles Florentino's undying love. The narrative is non-chronological; the book actually starts in medias res, starting the narrative when Dr. Urbino finally dies. After this short chapter, the book rewinds its timeline to the point when Florentino Ariza first notices the beauty of Fermina Daza. Slowly, the narrative progresses as it tells about how these two lovebirds write notes to each other, about how their parents are opposed to the relationship, about how Fermina finally rejects Florentino, and about how Florentino discovers sex while "keeping himself pure" for the next 50 years.

As always, I love Garcia Marquez's narrative style. It's just the type of prose that envelopes you, cocooning you in the story as you read it paragraph by paragraph. The descriptions are so sensual and luscious, at times I felt like I was making love with Fermina Daza or with Florentino Ariza, depending on who was being talked about at the moment. Garcia Marquez's prose has the unbelievable capacity to tap into one's emotions; it feels like one's feelings were faithfully transferred into prose, which made me feel like I totally know how Florentino was feeling at every point in the novel.

I am not sure whether I like Florentino Ariza as a main character. As much as I love the book, I don't think I am a fan of this protagonist. But then again, I am more of a rational being, not a hopeless romantic. See, in some ways, one can construe Florentino Ariza as an obsessed individual who cannot deal with rejection. Fermina Daza has rejected him, yet he still never gives up, and for the next fifty years, he constantly waits for Fermina to be available again so that he can date her. Whether that is intense romanticism, or plain obsession I do not know. I definitely would not appreciate someone hanging around in my life for the next 50 years even if I told this person to go away.

Another thing I cannot agree with is Florentino Ariza's belief that he has remained a virgin for Fermina Daza. See, Florentino Ariza has the ability to dissociate sex from affection. I agree with this one, I also personally can say the same. Just because I had sex with someone else doesn't mean that I have affection for this person. Sex, for me, is a physical activity, and can be a means to express affection, but they are orthogonal with each other, and are not equivalent with each other. One can express affection for someone using other means aside from sex, and one can have sex with someone without expressing affection. So since Florentino Ariza has been rejected by Fermina Daza, he goes on having various affairs with other women, all the while making sure that he doesn't fall in love with these women. Sure, that might work, but I disagree with him when at the end, he tells Fermina Daza that he has remained a virgin for her. I do not understand why people still make a big deal about virginity. When I had sex for the very first time, my first thought was "Really, that was it? How was that special?" I'd rather place importance on the relationship, rather than on the first instance of sex. After all, what's the use of a very special first sexual experience, when the person you had it with doesn't turn out to be the person you'll spend the rest of your life with?

So, I wish Florentino Ariza were less of a hopeless romantic. I don't think his perseverance lost any of its value if he admitted that he has had affairs for the last 50 years while waiting for Fermina Daza to be available. One's love is not measured by how long one can wait. Sexual abstinence, after all, seems to be a religious construct, and society as a whole seems to have been brainwashed into thinking that humans should refrain from having sex as much as they can, when sex is a natural human activity. Again, this is one of those weird religious implementations that have crept into human society, and frankly, sometimes these just don't make any sense.

Overall, I loved this book. I may have qualms with the main character, but overall I still liked the experience of reading this book. It is very sensual, very romantic, and reading this is such an evocative experience, which makes me rank Gabriel Garcia Marquez as one of the best story-tellers the human race has ever witnessed. I give this book 5 out of 5 stars.