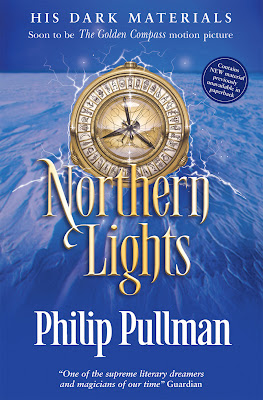 I have seen the movie a few years ago, featuring Daniel Craig and Nicole Kidman. At that time, I remember liking it, and therefore put the idea of reading the book in my backburner. The only thing discouraging me was the fact that fantasy isn't my most favorite genre to read.

Anyway, a few years passed, and I was searching for a book to read, and finally I decided to pick this one up. It tells the story of Lyra Belacqua, an English girl on the cusp of puberty, who happens to be the most important human in a universe that is highly similar to ours, but different. For one, every human in Lyra's universe has an animal companion, called a daemon. There are other characters, like witches and bears, though the geography looks strikingly similar to northern Europe. Lyra finds herself in the midst of a very troublesome period, where children get kidnapped by the Gobblers, and wars between humans, witches, and bears are fought.

I won't say more about the synopsis. I will just mess it up. But perhaps I have to admit that I picked up this book due to the controversy that surrounded it. It has been criticized by Christian groups as anti-religion. Of course, as I was reading the book, I kept trying to find where these anti-religious themes are. But honestly, I had a little bit of a hard time finding it. In my opinion, it wasn't anti-religion enough.

Yes, I am biased. I am an atheist, after all. And I was expecting Philip Pullman (who is an atheist activist) to write a fantasy book that is full on anti-religion. But no, it is rather subtle. If you aren't looking for it, then you might miss it.

See, the book tells the story of a universe where there is a group of intellectuals (called The Church) who basically control what people should and should not believe in. Most of these controlled information concerns daemons and Dust, which, to some degree, can be said to parallel our notions of souls and original sin. In the book, the Church dictates what people should believe about the nature of Dust, and if someone disagrees with the official doctrine of Dust, then they are captured and punished for heresy, and kept in exile somewhere far where they cannot influence the beliefs of others.

Now that is just something I am definitely very much against. Dissent should definitely be allowed in any type of democracy. Not allowing dissent just results in intellectual captivity. We all have a brain, we therefore should be allowed to think for ourselves, instead of being intellectually imprisoned by a black little book such as the Bible or the Qur'an. Nothern Lights subtly alluded to that, but in my opinion, it didn't reinforce that thought enough. I have a feeling that people reading this who are not aware of Philip Pullman's anti-religious background would simply read this as a simple fantasy novel, not being aware of its religious overtones. That was how I read C. S. Lewis' The Lion, the Witch, and the Wardrobe back in high school, after all.

I have to say something about the religious groups that criticized this book. I find it funny that the Catholic League and Focus on the Family actually criticized this book for having an anti-Christian agenda. I wonder why they would mind, I wonder why they would feel that Pullman is anti-Catholic or anti-Christian, when several centuries ago, the Catholics were definitely anti-non-Catholic. Heck, the Inquisition happened, and Catholics definitely did some very bad things to people who dissented. That is history, what is wrong with writing about it? Can't the Catholics own up to what they did, for once?

The problem with religion (yes, I am taking the Catholics as a representative of organized religion here, but I have something against organized religion as a whole, whether it's the Catholics or the Muslims, or something else) is that they try to dictate to their believers what their believers can believe in, and they definitely cannot handle criticism and dissent. Look at Galileo for example. Galileo was persecuted and tried by the Inquisition for promoting the heliocentric theory. The Catholic Church took that as heresy, as at that time, the Church believed in the geocentric theory, where the earth is the center of the solar system. Believe it or not, only in 1965 did the Church revoke its condemnation of Galileo. That was several centuries too late.

Obviously, I have a lot of angst against religion, and it derailed me from writing this book review. But let me bring myself back. The only thing I don't like about this book is that it is a fantasy, and therefore involved travel. Is there a fantasy book that does not involve travel? Why does every fantasy book involve travel from one place to another? In this book, Lyra traveled from Oxford to Svalbard, and had adventures along the way. I have the idea that travel is a mandatory feature of fantasy novels, and that somehow discourages me from reading other fantasy books.

That being said, I have to say I liked this book. I find its anti-religious theme a little weak and subtle, and I find the travel theme a little bit cliche, but otherwise, I like the book overall. This is perhaps one of those books that could be read twice; once as a young adult, and next as someone who has more experience with the world. I give it 4 out of 5 stars.