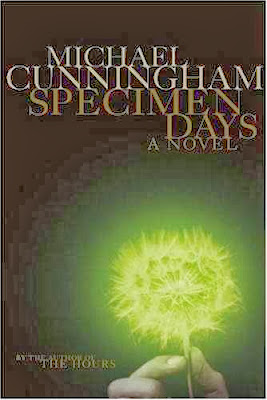 After reading The Hours almost a year ago, I decided to go back to Michael Cunningham and read the next book he wrote, which was Specimen Days. As I have heard, this book has several parallelisms with the previous one, in that there are also three stories rolled into one, and that there are parallel characters across the various stories. With that, I was anticipating to be awed and amazed by this book as well, and sure enough, it delivered.

All the stories are set in New York. One is set in the past, during the boom of the Industrial Revolution. The second is set in the present, post-9/11 New York. And the last is set 150 years into the future. In all stories, there are parallel characters: a woman, a man, and a disfigured young boy. They take on different yet similar characters in each story. At the same time, there are also parallel objects: a bowl is mentioned in every story, as well as a horse. There are possibly other similarities, but I won't mention them here.

See, this is one of those books that at first, I thought I hated. I was reading the first story, set in the past, and I just cannot make myself like the narrative style. It felt too emotional, it felt like it was tugging too much on one's heartstrings. And perhaps because it is a short story after all, there weren't plenty of scene-setting devices or elaborations; the reader just fills it in between.

Sometimes I wonder what this book is about. It tackles several issues, and I won't talk about all of them here. But one of the most prominent issue is that of fate and destiny. In every story, there is a character that tries to do more than what is expected of him. We live our lives surrounded by expectations due to the various roles we fill, and sometimes, people just need to break free from that. That is one powerful message that this book is giving. Otherwise, who knows, we might all end up in the dystopian future that Cunningham has sketched for us in the final short story of this book.

Overall, I liked this novel a lot, even though I started by not liking it. This is again why I read books all the way to the end, even though I might not like the beginning. I give it 5 out of 5 stars, as this is one of the best books I have read in the last year.