Book Review: Let It Come Down by Paul Bowles 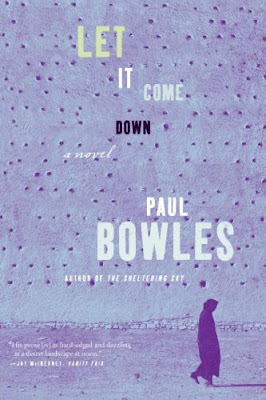 This is the second novel I have read from Paul Bowles. And more and more I wonder why I haven't heard of him as an author before, when I love his novels to the point that I devour them. First, I read The Sheltering Sky, which is an existential novel. And now, I have finished reading his second novel, Let It Come Down, also set in Tangier, about a man's slow descent into nihilism.

The main character is Nelson Dyar, a single American who has a stagnant job in the USA, who contacted an old friend and asked for a job. His old friend Wilcox somehow runs a mysterious agency in Tangier, who Dyar doesn't bother to investigate its legitimacy. Wilcox offers him a job, with no contract and all, and somehow, there's no concrete purpose or position whatsoever. So Dyar becomes involved in the various bad elements in Tangier society which eventually lead to his demise.

As in The Sheltering Sky, Bowles fills this book with characters that are not easy to like and sympathize with. All the characters think that they are superior than the others, whether it is the Europeans and the Americans, who think that the local Moroccans are all second-class citizens (one character remarked near the end of the novel that Moroccans are only good for breaking things, give something to a Moroccan and ten minutes later you'll get it broken), or it is the local Moroccans, who think that all Europeans (or Christians, or Nazarenes, using their term) are barbaric. And as in Bowles' previous book, the collection of negativity in the characters contrast very well with the beauty of the surroundings that these characters find themselves in.

I am not sure why I find myself reading these existential novels. And yet I do enjoy the experience of reading it, as if I am simply sitting down, relaxing, watching Bowles destroy his characters one by one, slowly and painfully. As I said before, none of his characters are likeable and easy to identify with. His characters are all arrogant and full of themselves, the archetypal traveler that I hope I never have to deal with too often. And perhaps it's just a huge dose of schadenfreude which I get, whenever I read these novels, as I watch these arrogant folks get destroyed by their surroundings, who they never even bothered to do research in order to become familiar with them. I guess I never really liked these types of people who think they know everything, and automatically assume that what they know to be true in their small town is also applicable in the wide world, which they haven't visited, until now. Such arrogance.

Anyway, I digressed. This book, however, is such a wonderful example of that scenario. So if you are like me who love watching other people wither and die, at least in a literary way, then read this book. It is very wonderfully written, well-structured, and each section seems like it's a further descent into the seven levels of Hell. Oh wait until the very last chapter, when all Hell breaks lose, and corruption is at its finest. I give this book definitely 5 out of 5 stars. Totally recommended.