Book Review: Notes from an Exhibition by Patrick Gale 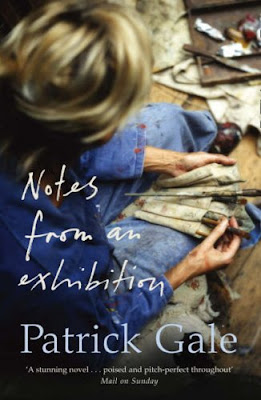 I knew nothing from this author, but while I was in a second-hand bookshop one day in Berlin, I opted to pick this book up just to find a book from an author I haven't read before. Little did I know that I would like this book very much.

See, this book is about a family somewhere in England. The mother is a painter, and is bipolar. The father is a Quaker, and there are four kids. The mother dies, or at least that's how the book opens. And little by little, the book unravels the mysteries that the mother has left her family. After all, they know nothing about her past, and so her death reveals her origins, and the secrets that were hidden until then.

I should say that the plot isn't the thing I like the most about this book. Rather, it is the narrative structure. See, this book is non-linear. Every chapter begins with a small blurb that looks like a note that would accompany a painting in an exhibition. After all, it is appropriate given the title of the book. And additionally, the main character is a gifted painter.

These blurbs are dated, and the dates aren't chronological at all. Hence, imagine a timeline of the story that spans from the 1960s to 2000s. And every chapter gives you a slice of the story, from various points in time. Therefore, there are times when the reader simply has to accept that there are bits of information that are not yet known to the reader, but hopefully will be reveal later on. For example, who were the names that were mentioned in the first chapter? They were never introduced. But later on, it was revealed that those were the children of the dead painter. Also, is Petroc (a son) dead or not? Oh, he is. How did he die?

See, the thing I liked about this book is the reading experience. Not necessarily the plot. The plot I could care less about. It was borderline chick lit for my taste. I have to say though, that even though I have never been to Cornwall, this book does a great job evocating it.

Overall, I liked this book enough to recommend it. 3 out of 5 stars. It was a great reading experience, but it felt more like an emotional airport novel for me, if I consider the plot. Some people might think that it is a great study on the dynamics of family, but I should say that even though I have a rather complicated family situation myself, somehow I just didn't find myself relating to it.