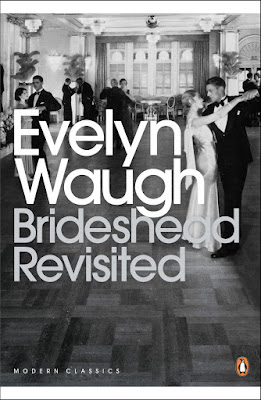 I hated this book. Perhaps because of the characters in it, or perhaps because of its implicit message promoting Catholicism. See, I picked this book up, mostly because Evelyn Waugh is until now an author I haven't read before, and knowing that this is his most highly-rated book, I had high expectations. Alas, after reading this I don't think I am keen to try any other novels by Waugh any time soon.

Anyway, let me provide a short synopsis. This book is narrated by Charles Ryder, a young man in university, who doesn't really have a traditional social relationship. His relationship with his dad is sour, and he is more infatuated with hanging out with Sebastian Flyte and his family, the Lord Brideshead. This family is quite dysfunctional. There is a father who openly has an affair; a very religious mother; Sebastian, who is an alcoholic; another son; and two daughters, Julia and Cordelia. The level of religiosity in each of the family members differ, in any case, those religious ones are Catholic. And religion has a huge effect on these characters' lives.

Perhaps that is what I find annoying. There are so many restrictions that are in place, limiting the lives of these characters, but really, if religion were for once taken out of the equation, then things would be easier. For example, Julia was going to be married to Rex Mottram, and everything is fine and going well, until they find out that Rex Mottram is divorced, and therefore cannot be married in a Catholic Church. Julia later decides that they would get married instead in an Anglican Church, without fanfare and pomp. And this causes great distress to the mother, who is severely religious.

I suppose what I find problematic is irrational belief, and the characters in this book are full of them. And what is worse, near the end, the main character, who initially was agnostic, starts showing signs of irrational belief as well. I really don't understand why people have the urge to believe in imaginary men in the sky.

The final death scene was perhaps the most annoying. Lord Marchmain is terminally ill, and so his religious children are all worried, because in their view, their father needs to see a priest before he dies, so that he could be saved and go to heaven. A priest shows up, and since Lord Marchmain abandoned religion, he throws the priest out. But the religious children wouldn't give up, even discussing the technicalities of whether Lord Marchmain refuses to see the priest because "he hasn't been a practicing member of your Church", the religious children arguing that their father meant a particular church, and so it would potentially be okay if another priest came.

Come to think of it, everything is in their heads. The belief of heaven and hell, all of these are just beliefs in their heads, and I find it sad that sometimes, peoples' lives are ruined, because of imaginary beliefs. Putting this thought outside of fiction, and into contemporary context, just look at the numerous children dying, because their Jehovah's Witness parents refuse to give their children a blood transfusion. Or the children who died because their parents are members of the Followers of Christ, and they shun all healing practices aside from faith healing? As much as it might simply be religion, the implications of these irrational beliefs are actually immense, and there are plenty of people's lives at stake.

Overall, I did not enjoy this book. I was battling it with every page, and after 325 pages, I was glad to be done with it. I give it 2 out of 5 stars.